An honest conversation with Andrei Sharenda, the husband of political prisoner Palina Sharenda-Panasyuk.

- How would you describe Palina: what kind of person is she?

- Palina is the most important, my favorite person for me. We have known her for almost 16 years. We have been married for 13 years - we have two children. So we are now as one.

She is a historian by education. She graduated from Brest Humanities University with a degree in history. Later she studied in Warsaw as a political scientist, where she graduated with a master's degree. Worked at the Institute of People's Memory in Poland. Before her arrest, she was a Polish language tutor. Palina and I are Belarusians. Patriots of their homeland and do not see their future somewhere out there, abroad.

- Is she from Brest?

- Yes, she was born in Minsk but lived all her life in Brest. She graduated from school and university here.

- Your wedding was 13 years ago. You are in national costumes. Whose idea was it? 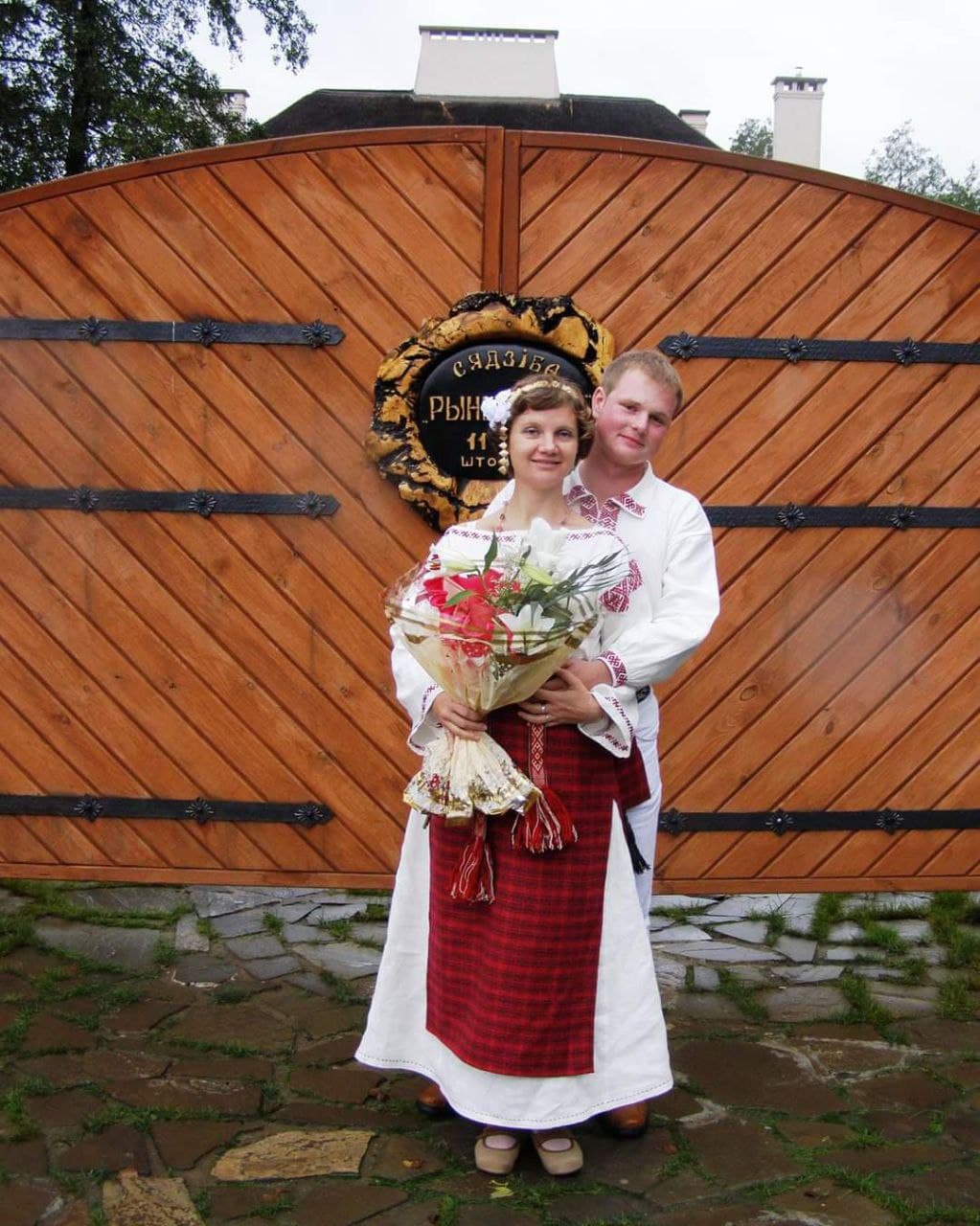 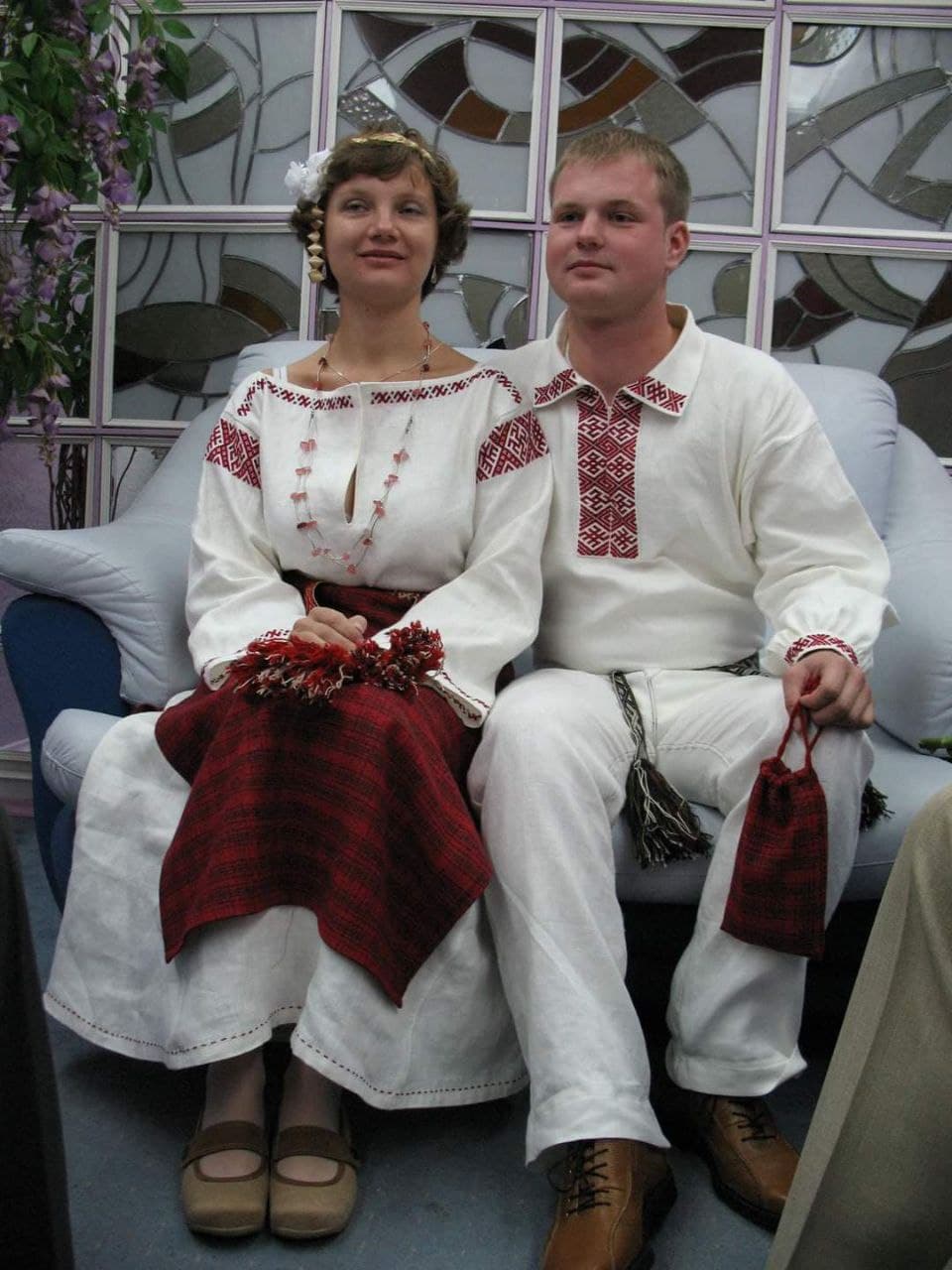 - Yes, we wore embroideries when it was not mainstream (laughs). Palina and I were united by love for Belarus, love for the native language and culture. We were also in the protest organizations "Zubr," "European Belarus." Therefore, the idea came to us to marry in national costumes. This is respect for our ancestors including.

- How did your relatives and registrar's office react to this?

- There were only positive emotions. There were a few more couples when we signed up. But they were dressed in standard - white dresses, black outfits. They all wanted to take pictures with us. So there were definitely no negative emotions.

- Do you also speak Belarusian in your family?

- Yes, we have a Belarusian-speaking family. And children are classic bilinguals: they speak both Belarusian and Russian well. Language is a means of communication. No problem if children speak one language at home and another on the street or at school. We always use the Belarusian language in the family.

- How old are your children now, and where are they now?

- The youngest son five, the eldest twelve. Yes, they stayed in Belarus. The situation is such that Palina is behind bars, and I was forced to leave Belarus. I look at it soberly and believe that the processes that began a year ago are irreversible, and soon we will all be able to return to Belarus. 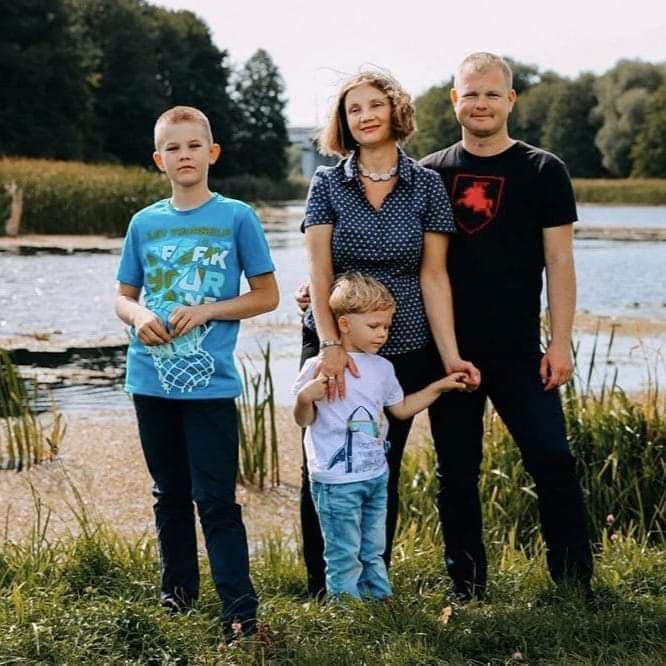 Yes, I did not consider ways of leaving - how to take out children. But, of course, if all this drags on, I will consider how to take them abroad and look for options with the school. But so far, they are in Belarus. Live with my parents. Palina's mother also helps.

Maybe someone will ask why I’m not with the kids now. But I hold the view that we won last year in the sense that most of us are. The children are safe now. Society will not allow the regime to do anything with children.

- That is, there was no pressure on you or your parents through the children?

- There was pressure when Palina and I were free. The goal was to interrupt our activities. But this pressure has always faced opposition from ordinary people who opposed it. Therefore, it did not go beyond any warnings, and I hope it will not work.

And in our situation, when mom is in jail, the kids moving to another location would be a big stress. I still want to avoid that. So that, at least for a while, they remained in Brest. The eldest son has many friends in Belarus, and it is difficult to pull him out of the country not to lose touch with his homeland.

I repeat, if all this drags on, then I will have to take the children to me because they need parents. But hopefully, everything is in our hands. We must do everything to make our victory come as soon as possible.

- This is not the first time a topic has arisen with pressure on activists through their children. Why is this happening?

- I think the system works. They are trying all options - prison, dismissal. And here’s an option with kids. But in case the majority is behind us, I think these threats will be unfounded. For example, Palina and I take care of many people, including teachers.

- Tell us how Palina was arrested.

Palina was detained several times between August and December, but because we have children, she was released quickly. They wrote out fines. Well, maybe a few days in jail. By the way, at one point, we were sitting in the same building and even in the neighboring cells. Could knock there.

I was detained six times between August and November. In total, I spent 85 days in prison before Palina was arrested (this happened on January 3, 2021). After the new year, our house was searched, and my wife was detained. An article was immediately filed against her for insulting lukashenka and threatening violence against police officers. As a result, she was locked up in a pre-trial detention center. This arrest was a planned provocation. Imagine a dozen people knocking on the door to an apartment with a sledgehammer. They were just going to pick her up.

Both Palina and I have long struggled with the regime. We were prominent activists in the city. For example, in 2019, we conducted a campaign to awaken people. They held pickets in the center of Brest. They were standing with white-red-white flags (they hadn't been detained for that then). Palina spoke on television (as a participant in the parliamentary election campaign) and managed to convey her position, including calling lukashenko a dictator.

Of course, revenge has accumulated on the part of the regime, which is why such a provocation took place. 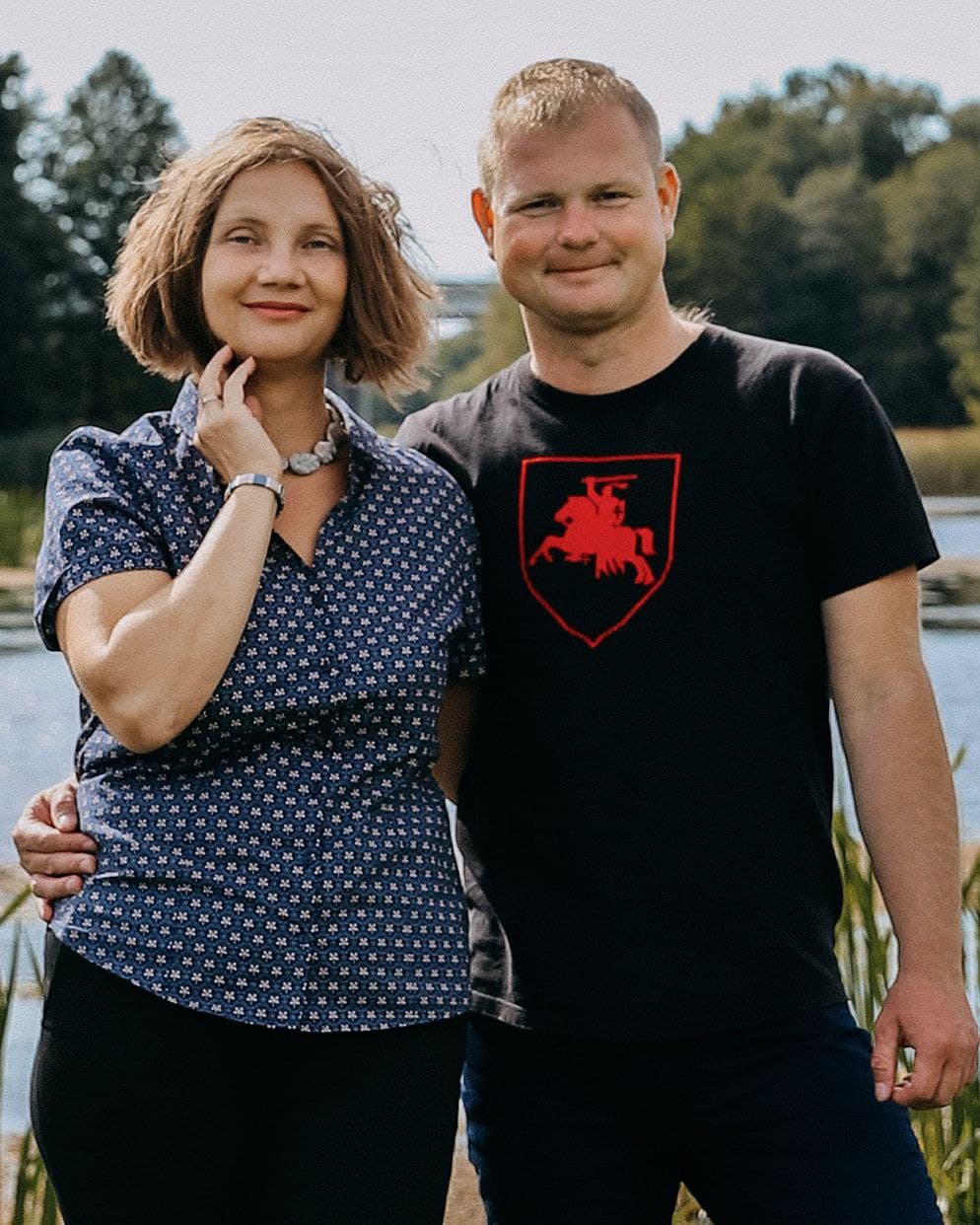 - How did the children perceive such brutal detention of Palina, a broken door?

- Fortunately, the elder was not at home. The younger one understood a little. He only said that "evil people came and took my mother."

I was then released from the detention center. Another trial was to take place, but I did not attend it. He took the children and left the city for a while. To get some rest, relieve stress from children. More or less, they withdrew, the psyche recovered. People helped a lot. They came, asked what to help, brought some gifts to the children. I am very grateful to them. It was important to understand that you are not alone. That there is solidarity, which will eventually lead us to victory.

- Were you present at the trial of Palina?

- In the spring, I was attacked by criminal articles (for mass actions that violate the order, for slandering the president, for harming the state's interests by calling for sanctions). I was eventually arrested and placed under house arrest. It was a week before the trial of Palina.

Investigators told me that I shouldn't have gone there (to court), but I could not do otherwise. At that moment, I had not seen her for almost six months. I was in court, on trial for a decent, courageous man. Palina showed how to behave. This is a play, not a trial. Therefore, the main role should be played not by all of them but by the defendants themselves. Palina succeeded. She became a real symbol. 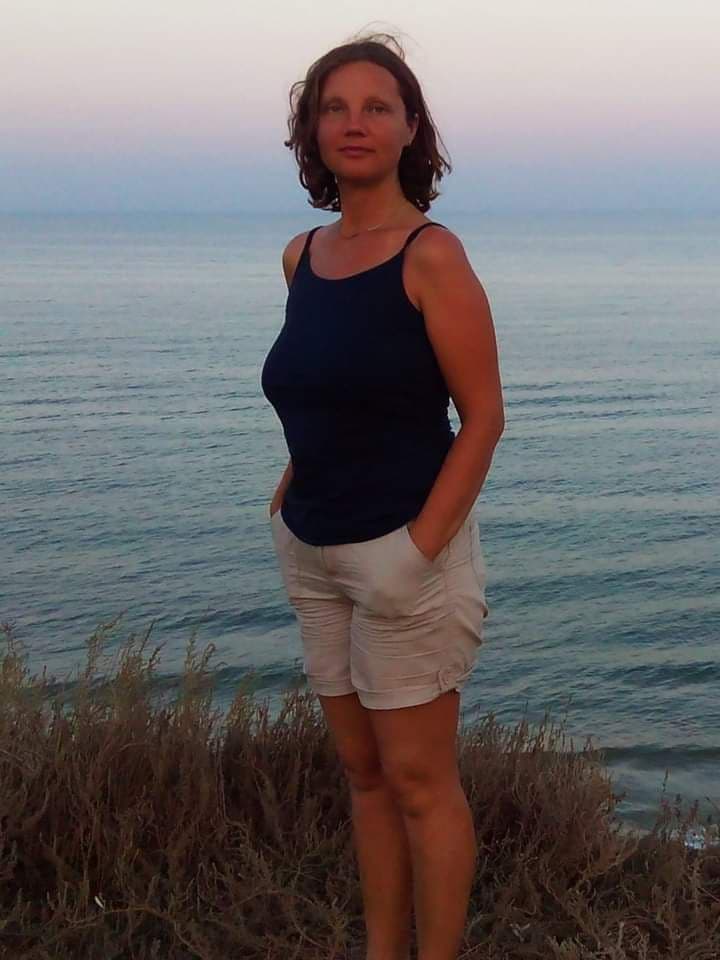 - Do you mean her final speech in court?

- Yes. I had no doubt. Palina is a woman with an indomitable will, whom nothing can shake in her eyes. What she said in court follows from her character. She always tells the truth face to face.

You had to see that judge. He didn’t know how to behave, how to finish the process faster. And by the way, the lawyer later said that there were no such fast courts in his practice. The judge was in a hurry, ready to finish everything in a day. But Palina still managed to convey their ideas and views through speech.

I am sure her words will go down in history. The time will come, and maybe my grandchildren and Palina will read her speech in history textbooks of modern Belarus (smiles).

- Why do you think judges and prosecutors are involved in all this?

- Several judges refused to take part in the trial. Found, as we see, such a devotee. He obeys orders, can consider himself such a soulless machine. The system, unfortunately, works. Such is the role of these people. I am sure that these "cogs" will have to answer for their actions before a fair trial.

- Did you leave Belarus after the trial of Palina?

- Yes, the only thing I managed to meet with Palina. We had a brief rendezvous. Of course, we could not talk normally. Palina made the main message that you need to go and continue the fight. With the help of friends, I found myself in Lithuania. Not to hide but to continue the struggle and do everything to release Belarus's free and political prisoners. I am very grateful to "A Country to Live in" foundation, which is also involved in this struggle.

I urge people, including by their example, not to stop but to act. The main principle of both mine and Palina: never stop, and then victory will be.

- You published an appeal in which you said that neither you nor the lawyer has been in contact with Palina for a month. Why is this happening? Why is there such an information blockade?

- In СC-4 in Gomel, people are purposefully broken. I know about this from the relatives of other political prisoners. The same Volga Klaskouskaya, Safia Malashevich, Natalia Hershe. They refuse to work on this system, sew uniforms for riot police.

Palina will also not cooperate with the administration. She spent more than 40 days in solitary confinement in the pre-trial detention center alone. She was pressured in the form of an examination in "Navinki" (psychiatric clinic). So the pressure on her continues. They want to break her will. But I’m sure she will endure. Palina is a strong person. 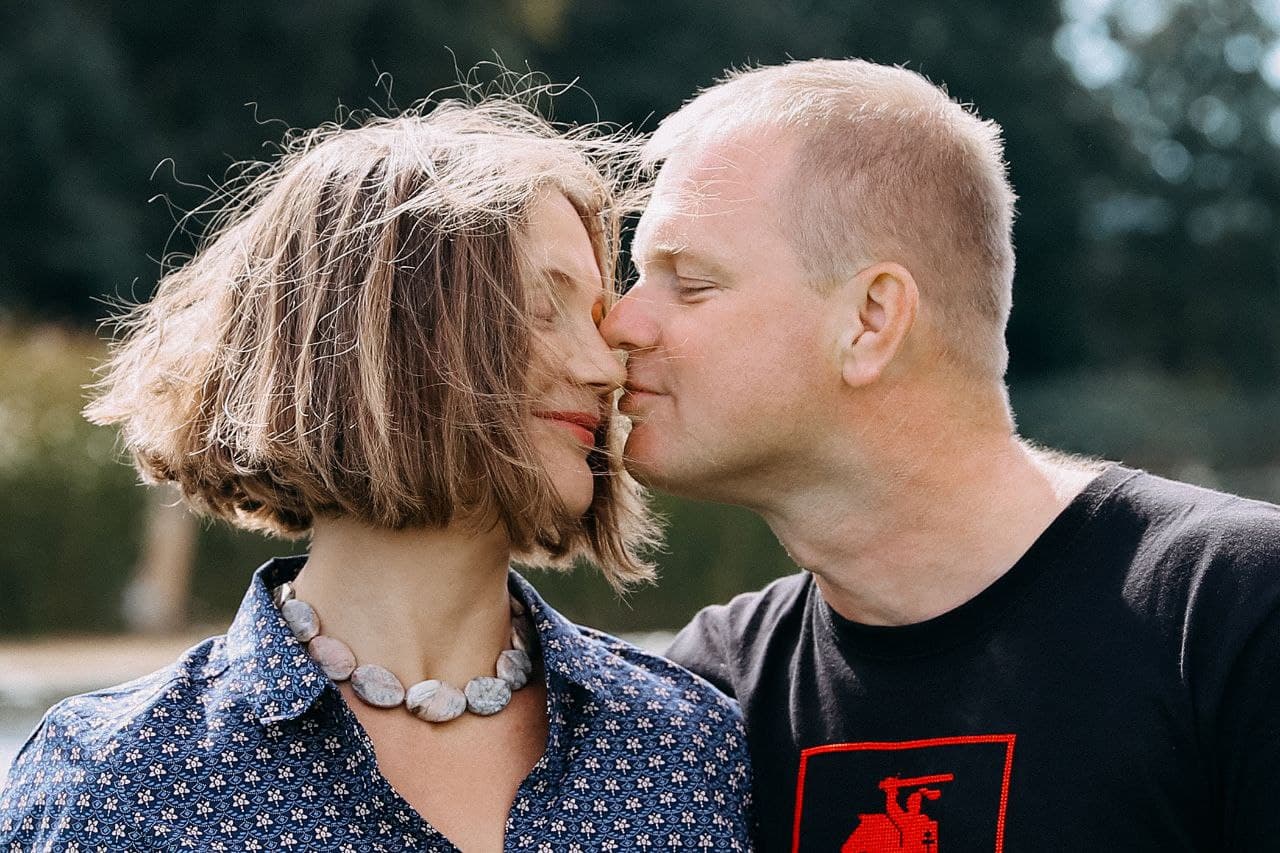 My appeal is made to draw attention to the fact that women are now being tortured in the center of Europe. Just in the city, in a correctional colony. This is the Middle Ages when people are imprisoned for their views and create unbearable conditions there. So this case needs to be covered.

And I will remind all Belarusians that only our actions will release all those in prisons and who are actually killed there.
SHARE: 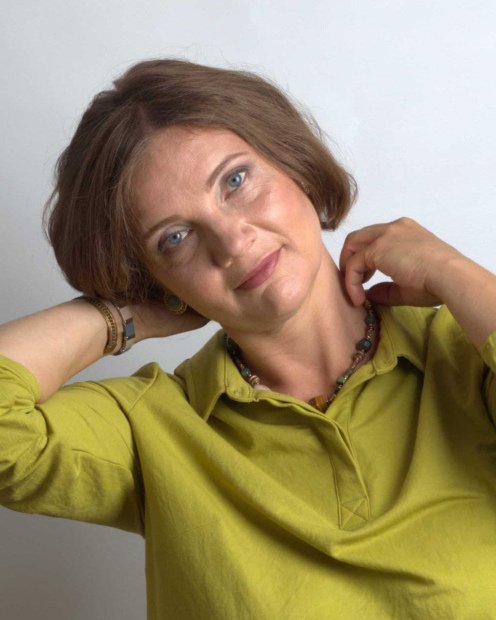