The story of Marina, whose husband Vladimir Neronsky has been imprisoned since May last year

On February 2, the verdict in the case of Vladimir Neronsky was announced. Judge Alexander Rybakov found him guilty under criminal articles of insulting a government official and organizing group actions that grossly violate public order. The verdict is three years of imprisonment in a general regime colony. Vladimir Neronsky became widely known in the spring of last year when his youtube channel "Slutsk for Life" was launched. Marina, the common-law wife of Vladimir, agreed to tell in more detail about the events of 2020 and not only.

Who is Vladimir Neronsky? How would you describe him?

My husband Neronsky Vladimir Nikolaevich, originally from the town of Slutsk. Grew up in a large family (5 brothers) and a mother. His father died when Volodya was 24 years old, and he helped his mother raise her younger brothers. All brothers grew up and lived with families in Slutsk. But Volodya has been living in Minsk since December 2015. He has a higher education graduated from BNTU. For about 10 years, he was engaged in folk dances and often performed at various events. He is called "the soul of the company," he has many friends and acquaintances. He was a favorite graduate at school.
He worked as a shop manager at the Soligorsk Vodokanal. Recently, he was the director of a company that produces charcoal. Volodya is very sociable, energetic, responsive to any problem (this is his vocation), loves to read, leads a healthy lifestyle (does not smoke, alcohol only on certain holidays). Believer. He always prays and goes to church (especially for the last 3 years). Personal life was not easy, very multifaceted. Has 4 children (2 sons and 2 daughters). But his great gift helped him to live peacefully and amicably with everyone. Very kind (even somewhere vulnerable), knows how to support and help a person. He knows how to admit his mistakes and correct them. In general, a person with soul and heart. In business - a generator of ideas. Charming and courteous. Loves children. Whenever possible, gathers them together and communicates.

How did Vladimir get into the team of Sergei Tikhanovsky?

On February 2 of last year, we met with Sergei and went to Slutsk to shoot a video about its problems and people. Later, Sergey invited him to create his own channel, helped with this. This is how the channel "Slutsk For Life" appeared. Volodya was gaining popularity. He received dozens of calls a day. Everyone asked for help. They wanted to reach out to truth, law, and justice. Volodya was "torn" and understood that people like him were needed. I saw him less and less (but I accepted his decision and was proud of him). It was April 30th. He called and said: "Honey, forgive me, I need to go on a business trip for a few days with Sergei as a motorhome driver." On May 6, he told me that he was at the ROVD in Mogilev.

Why did he join Tikhanovsky's team?

He ended up in Sergey's team by the will of God. Help people, do good, and change your city and country for the better. For yourself and your children. For a country to develop, everyone needs to be in their place. People like Sergei, Volodya, and many others are needed under any government (independent control experts), and even more so with a "cockroach." But the "cockroach" gave birth to ("father-hero") cockroaches-officials.

Where is Vladimir now, where will he serve his sentence?

During the entire period, Volodya was convoyed 14 times ... He visited the temporary detention facility in Mogilev, Maryina Gorka, Slutsk, at Okrestin Street in Minsk. He spent some time on a forensic medical examination in Novinki. Then there was a prison in Minsk on Volodarskiy Street, an IVS in Logoisk. Now he is in prison in Zhodino. We have filed an appeal and are waiting for a new, now regional court.
We pray and hope for a miracle.

Why was the first trial over Vladimir in Logoisk and not in Slutsk or Minsk?

Several versions. First, there would be a large support group in Slutsk. Second: geographically, Zhodino is further from Slutsk than Logoisk. But in Logoisk, there are almost no court hearings. On the schedule, our hearing was almost always the only one. It isn't easy to analyze - a blogger from Slutsk and the court in Logoisk. Marasmus!

Does someone support you during these months?

The support is outstanding - first, the moral from friends and acquaintances. My husband received almost 300 letters for the entire period (maybe many did not reach) from different cities of Belarus and other countries. The letters contain words of support and pride for people like him. Assistance in paying a lawyer (this is a huge expense), I could not pay for it in any way. Grocery help. Sweet gifts for children for the new year. Help with money from people through funds. And also, according to Volodya, in addition to my programs, volunteers transfer parcels whenever possible.
Low bows to everyone who organizes aid funds. As well as volunteers. It gives them confidence and strength to deal with both moral and financial challenges. And believe that goodwill destroys evil.

How soon do you expect to see your loved one at large?

At first, I very much believed that he would be released after 40 days in the IVS. Then, after the fabricated elections and the first march on August 16, I hoped that after 6 months under investigation. But the trial (which lasted 6 days with interruptions) even finished me off. I did not expect such insanity! And now I would like to change the measure of restraint (if only for the sake of 3 small children). And to be honest, I really look forward to the Spring-March-Change and the great unity of all peaceful people. The husband believes in victory in the spring (he said that he was not afraid of punishment after all that he had endured). He is anxious that the children are without him. I often receive calls from people who were in the cell with Volodya. They praise him very much for his moral support, he calms everyone down and talks ask everyone to pray for the people's freedom from the devil. He handed out many things, who needed what, I have to buy him also.
I am proud, respectful, in love, and waiting for him!

Has your personal attitude towards Lukashenka and the system of power in the country changed over the past year?

My opinion has been negative for 10-15 years!

How is communication with Vladimir carried out (letters, etc.)?

Writes letters to family, relatives, like-minded people, and everyone else.

Is there a dating option?

Yes, I'm lucky with dates. Twice I went to Slutsk to the IVS with a child. Maybe because he himself is from Slutsk and many people know him. He himself asked that his wife be allowed. In Slutsk, appointments are allowed, but there is no room. Well, as usual, nonsense. But under investigation, they were not allowed, they explained, it was forbidden. But at one point, the investigator (probably was on sick leave) and called the chief head of the investigation group Agafonov, asking for a meeting. Allowed immediately, only asked the purpose of the meeting. I said I was worried about my husband, worried about his health, and his son missed him very much. I was shocked. And then I called him once a month and asked for a date. 3 times to Zhodino and 1 time to Volodarsky after signing the paperwork). Then I saw Volodya in the courtroom 6 times. And the last time I saw (February 16, my birthday) in Zhodino in prison, the judge gave us (with the children) a meeting after the verdict.

How do you assess the sentences and the work of the prosecutors?

Very short. The courts are staged! Paid. There is an order - there is no conscience. There is no need to learn from such prosecutors and judges. Pain, fear, and resentment for the spoiled destinies and psyche of honest people. Truth lives forever, but lies are temporary. So, the real Judgment is ahead. Nobody left him ...

What is your overall impression of the trial?

When I was young, I had a chance to rent a room from the chief KGB officer. It was 18 years ago. So the man told me. Frankly, he knows why he is suffering now (his young son and wife died of the flu). He repeated it a hundred times. This is because he had chosen a different profession where innocent people's fate is decided on a madman's orders. I remembered it all my life! In our country, everything is decided through either-or. And as a result, the leadership of mediocre mannequins, corruption, murder, drugs, banditry ... And all this is covered with a fake of a beautiful city and "true" news on TV as if from outer space.
Maybe someone will say that everything was not right. There are enough smart ones ... But I think that someone should have put a beginning to the end by any means. One of these, someone turned out to be my beloved husband. Although it is hard for me now, I am happy with the thought of a new life for all of us!

A"Country to Live in" foundation provides financial support to the families of political prisoners.

You can help the foundation work HERE. 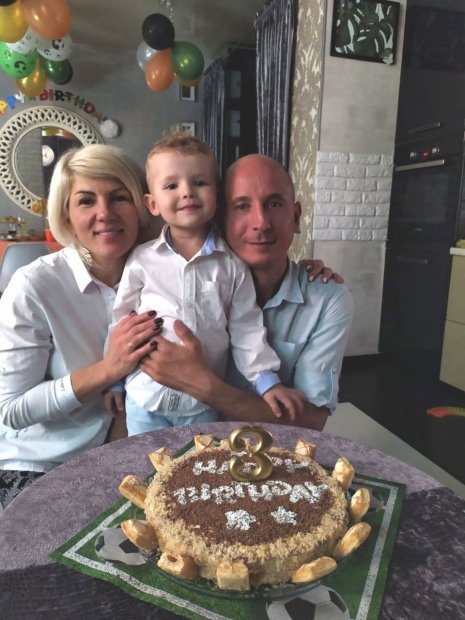