2020 divided the life of Belarusians into before and after. Tens of thousands of our compatriots have gone through torture and detention. More than a thousand are still in prisons and isolation wards, where they serve unfair terms of imprisonment, are subjected to inhuman treatment.

Today we will tell you about three Belarusians. Some have fully served their time, some are now in prison, and some have happily escaped from hell. They are united by the desire to return to free Belarus as soon as possible, as well as the difficult trials they went through. They all need our help.

Dmitry Furmanov was a member of the initiative group for the nomination of Svetlana Tikhanovskaya for the presidency. He was arrested during the famous signature collection picket in Grodno on May 29, 2020. Then the security forces caught Dmitry just along with the chair on which he was sitting. For a long time, parents could not establish where their son was. He was sent to solitary confinement several times during his imprisonment, subjected to torture and inhuman treatment. Finally, Dmitry was sentenced to two years in a general regime prison, was released on October 21, 2021, and immediately left Belarus.


"The best place was in the temporary detention center of Akrestsin Street. It was from May 30 to June 3. I was there alone in a six-bed cell, where all the beds were made. I could take as much bedding as I wanted. I covered myself with two or three blankets because it was cool enough.

I could also sleep all day. When we had a collection of signatures and rode around the cities, I was very tired then. And all these three days, I, practically, constantly slept, and there were no questions, demands. So we can say that this was the best place to stay for me during the term. Then every time, the conditions got worse.

The last month and a half I spent in a punishment cell in a colony was the worst stage of my release. The fact is that at night they don't give you bedding, and you sleep on bare boards, which are upholstered with metal corners. It was the off-season when it was already cold, but the heating had not yet been turned on in the cell. They also don't allow you to go for a walk.

The administration wants to clarify that they don't care who is in power and are just doing their job. But this is not the case. Everything affects (the conditions of detention): prisoner's status and how the public reacts. So, for example, suppose you are a simple prisoner, not a political one. In that case, naturally, no one will stand on ceremony with you, and if something happens, everyone will not care. And when there is attention to a person from the public, they try to prevent any problems from arising.

If we talk about the attitude of ordinary prisoners to political prisoners, then everything is individual here. Someone agrees that lawlessness is going on in the country. Someone says that he doesn't care. The same goes for other political prisoners. There are cases when people "changed their shoes." At first noted that "we are against," they were sentenced for this, and then suddenly, they sharply told that they were against all "zmagars." I heard this at my address. It also happens that people change their minds.

There were many difficult moments (in prison). I remember the news about Vitold Ashurok's death in jail, in the punishment cell. I found myself in practically the same conditions and understood why his heart stopped. Maybe it could not stand such physical exertion. It was clear that people were being killed both in freedom and in prisons. And it will continue. But you pass every death through yourself, and it's difficult because you find yourself in the same situations and experience it on your skin.

I live in Vilnius now. There are no particular difficulties because there is tremendous support here. I am engaged in telling the truth about what happened to me. I also go to rallies in support of political prisoners in Belarus. I'm not ready for more yet. I need to fill my information vacuum, which has formed during my imprisonment, to find out all the details of each case.

For example, before I went to the action in memory of Roman Bondarenko, I only knew the general information, that someone had killed him. But I studied in detail what happened, and I understand that it is essential to honor the memory of this man, the hero of Belarus.

I must not forget about the recovery processes. To heal health, both psychological and physical. Maybe visit some sanatorium soon. And there you will see further where to move. At the same time, I need to find a job, which is what I am doing. "

Olga Pavlova was an activist of "A Country to Live in" project. She was imprisoned four times as a result of protests. A criminal case was opened against her for "organizing and preparing actions that grossly violate public order." During her stay in jail in Zhodino, she was placed in a punishment cell. She was on a hunger strike for 10 days. Olga Pavlova was sentenced to three years of "home chemistry." In July, she left Belarus illegally. "


"I live in Warsaw. I don't have a passport, so it was difficult for me to rent a house. In the bank, they didn't want to issue a bank card. All questions have been resolved today. It isn't easy to find a job (without knowing Polish), so I am studying the language intensively to get a certificate of level B. I plan to work in a covid hospital as a general practitioner.

I hope to return home as soon as lukashenka's regime collapses. Now I am in the criminal investigation department. They write to me with a proposal to give them my residence address to stop the criminal prosecution. But I don't believe them.

I still have not recovered from the stress that was in Belarus. Today I am at the level of accepting that everything will be long and that I need to look for a permanent job. But for the first two months (upon arrival in the EU), I had constant apathy and depression. It is easier when you are looking for a temporary position, but if you are looking for a long-term job, you seem to agree that we have lost.

Therefore, I visit a psychotherapist and take medications. The recovery period is a lengthy process. Plus, my family stayed in Belarus. In general, there are difficult moments "...

Polina Sharendo-Panasyuk - "Brest Jeanne d'Arc". A well-known public activist in the city above the Bug. She was arrested on January 3, 2021 (security forces broke down the door to her apartment). During her stay in the pre-trial detention center, she was placed in a punishment cell several times. Polina was accused of "violence against an employee of the Ministry of Internal Affairs," "insulting the president and a representative of the government." She was sentenced to two years in prison in a general regime colony.


Polina's husband, Andrei Sharendo, spent more than 60 days in 2020. He fled the country shortly before the trial. That's what he said.

"Polina has been in the Homel women's colony PK-4 for 3 months now. Immediately upon arrival (she was still in quarantine), the prison's administration offered to sign the so-called "Apology letter of Voskresensky." For her refusal, Polina was sentenced to 10 days in jail. When she was released from the cell, the letter was handed to her again, the procedure was repeated, the letter went to the dump, and Polina earned another 10 days in the crypt.

Of course, the prison administration used the "letter of Voskresensky" as a pretext for repression. There was no pardon for Polina. On the contrary, over the next two months, the pressure only intensified. All the parcels we sent her were returned. Polina is deprived of phone calls and appointments. In October-November, she was placed in a pre-trial detention center twice more. In total, she spent 40 days in solitary confinement for the last 3 months. Now her purchases in the prison shop have been reduced to a minimum (from the allowed 174 rubles to 58). It is clear that to buy for this money, even the minimum things that a woman needs, is simply impossible.

Such pressure is exerted on other women political prisoners: Olga Klaskouskaya, Antonina Konovalova, Natalia Hershe. For example, Natalia Hershe has been transferred to Mahilou prison for "violation of internal order" for a month. Also, all political prisoners have been forbidden any contact with each other. It is punishable by solitary confinement. Such pressure is put on the colony administration to break the spirit of political prisoners morally. This is done by order of Minsk, but the head of PC-4 Denis Anatolievich Tovstenkov is personally responsible for this repression.

Friends, please help the heroes of Belarus - Dmitry Furmanov, Olga Pavlova, Polina Sharendo-Panasyuk. Dmitry and Olga are free today, but they need support to get on their feet in another country. Polina is in prison - she will need funds to improve her health after leaving prison.
SHARE: 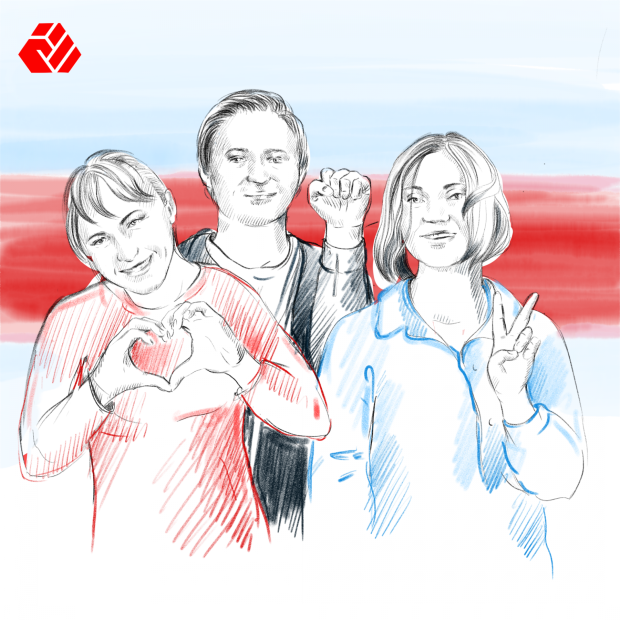