"A Country to Live in" foundation team. Pavel Zhurik: “I was most impressed by the solidarity of people”

"A Country to Live in" foundation aims to support and develop civil society, strict observance of law and legality, and, ultimately, building a real country for life instead of the terrible imitation in Belarus.

We continue to present to you the team of our Foundation - people who give all their strength to the struggle for the freedom of Belarusians. Today we will tell you about Pavel Zhurik. At the Foundation, he is responsible for coordinating the actions of volunteers in Belarus.

- Tell us about yourself - what did you do in Minsk?

- I worked in construction as an individual entrepreneur. For 15 years, I was engaged in landscaping: paving slabs, lawns, automatic irrigation. Plus related work - concrete rings, a fence.

- Yes. I was always interested in what was happening in the country. In my youth, I went to the "Chernobyl Way." But then, when the family appeared, I ceased to be an active participant in the events.

- What was your point of view regarding what is happening in the country?

- Lukashenko has never been my president. Because of all these falsifications. Everything was always clear with this. Some concentration camp is being built, when they can come for you at any time, put you in jail for some unknown reason, or take away your business.

- What was your idea of ​​ideal Belarus?

- You watch TV, not BT, but other channels, and you see that in other countries people can speak out, show their dissatisfaction with some government decisions, some local issues. People always listen to people. We have never had this - one person said, and everyone ran to perform. Nobody has ever heard of people. Plus, I have a lot of friends who have a business. They went to various enterprises and told how everything works in Europe, or Ukraine, for example. There, the conditions for doing business and for life, in general, are much better.

- I was a member of the initiative group of Svetlana Tikhanovskaya. Applied - accepted, issued a certificate - began to collect signatures. It can be said with the collection of signatures that everything began.

- I have a seasonal job - in the spring and summer, I mainly earned money. In winter, there was only some extra money - a taxi or something else. So in cold weather, I had a lot of free time. I gave it to my family, children - because during the season you work 12-16 hours a day and you hardly see your family.

And then one evening, I turned on Sergey Tikhanovsky's YouTube channel once or twice and watched his streams. People's stories about what is happening in the country, about this lawlessness, a mess.

I slowly began to look. Then I began to come to his streams. I participated, communicated with people. This whole situation hooked me. There was also this chaos with Sergey. When he was imprisoned for a day, it is not clear why.

And when Sergey Tikhanovsky announced that he would run, I joined his initiative group, which later became the group of Svetlana Tikhanovskaya. I was given a certificate, and I went to collect signatures. First, I was in Minsk for a couple of days. And then, seeing that there were not enough signature collectors in the regions, I went there.

- What impressed you the most on these trips?

- Human solidarity. It is clear that no one paid us, nobody refuel the car, nobody give us money for the night. But it was worth asking in some chat that I was going, for example, to Slonim, I had to spend the night, I needed a tent because it might rain, wet the subscription lists - everything was immediately found, literally in five minutes. People helped with everything.

Of course, I was also impressed by these queues when you see so much people. In the heat, in lines. It was inspiring.

- Was there any hope or confidence that Svetlana Tsikhanovskaya will be able to win the elections?

- Well, Svetlana Tikhanovskaya won. I understood who Lukashenko was and that he was unlikely to leave on his own. He is a dictator, and he will not give up power himself. Something had to happen for him to go after losing. It is not Yeltsin who said he was tired and was leaving. This one will not say so. And he still doesn't want to do that.

But there was confidence. It was evident from the people that they woke up from hibernation that everyone was ready for action. Someone - just put a signature, someone - go to the rally.

- And how did your family react to the fact that you participated in this campaign, especially at the height of the working season?

- The family council made a decision (to participate). Although, due to the coronavirus pandemic, the wife also had a hard time with work. But there was a financial reserve. We could live. In general, I deliberately went for it - I quit my job and started collecting signatures.

- Why did you have to leave Belarus?

- At one point, they began to take and imprison people with whom we were engaged in pre-election campaigning. And from one of them, I learned that they are actively interested in me. Perhaps they just gave me a chance to leave because they would have put me in one of the first if they were very interested in me.

And so I found out this information. I consulted with my wife, packed my things overnight, took the children, and left. At the border, they let me through usually (it was the beginning of November).

- When will we win, and when will you return home?

- I will return home anyway. I don't see myself abroad yet. In Minsk, I have relatives, an apartment, a business, and a job. But when? I would like it as early as possible. According to my feelings, this will not happen until autumn.

- Dynamo. My blood is blue and white.

- Kapski. He created a great club by the standards of Belarus.

- Of course, Belkevich. This is the best player of all time.

- Stepyanka. The area is somehow quieter. And these are different areas.

- Jump from a bridge or a windmill?

- From the bridge. I haven't jumped from it yet. 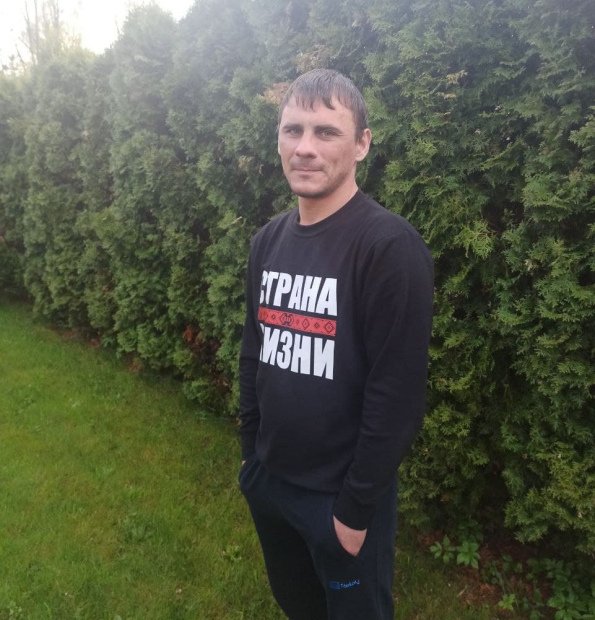