One of us. Yuri Vlasov

We continue to talk about our brave colleagues who decided to go all the way - for freedom for all Belarusians. Now, these people are prisoners, but any of us could have been in their place.

Yuri Vlasov, 54 years old:
Yuri Vlasov is a person who cares. He was engaged in social activities - including trying to solve environmental problems in the Novobelitsky district of his native Gomel, participated in the "marches of non-parasites," and in 2019 joined the team of Sergey Tikhanovsky.

He was not a "terrorist," "extremist," or "drug addict" - he just wanted to live in a peaceful and safe country in which the health of adults and children is not exposed to environmental threats, and people have the right to express their point of view.

According to lukashenka, such understandable human desires are criminal.

The logic of the dictator's actions has not changed all these years: to kill, arrest, isolate the most active - those who can organize and lead others. The ultimate goal is to extinguish protest sentiments and retain power. The logic of the actions of judges and prosecutors, who today act in the "houses of justice," is also generally clear - someone ideologically serves the authorities. Someone has compromising evidence. Someone is afraid. They have yet to face a real people's court.

There is terrible news for lukashenka and his aides. The tactics of isolation, intimidation, violence no longer work. The desire of people to be heard, the thirst for justice, is stronger than fear.

The Belarusian revolution is not an externally inspired special operation, as it seems to a dictator obsessed with paranoid delirium. Instead, it is a historical process of awakening an entire nation. The isolation of people like Yuri Vlasov no longer works. Belarusians have woken up, and we will not be the same.

Yes, today it is hard for us - tens of thousands of people have been tortured and humiliated in prisons. Thousands of Belarusians are still imprisoned for their political views. But the hours of history are unforgiving. The dictator's time is running out. And we all have to build a Country to Live in which the experience and skills of Yuri Vlasov will be primarily in demand.

Friends, remember that letters from the outside are critically crucial for political prisoners.
Please write to Yuri Vlasov right now. 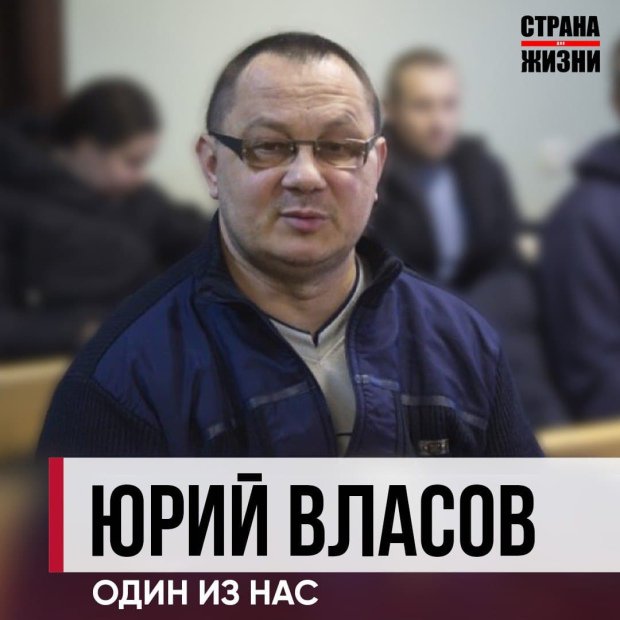