Happy birthday to those who were born in August. Part 2

Happy birthday to political prisoners born in August. Hundreds of Belarusians are still languishing in prisons across the country. Our task is to free them.

Send a few warm words to those who will celebrate their holiday in cold dungeons.

Our birthday parties are in August. Part 2.

Alexander Yurchik - a resident of Minsk, an activist, a defendant in the case "11 chat participants". Sentenced to 8 years in prison.
SIZO-1, 220030, Minsk, Volodarskogo, 2

Anatoly Khinevich is a 27-year-old programmer and bard from Borisov. Convicted for the fact that at the “March of Justice” he inflicted “prone strikes” on riot policemen.
IK No. 3, 211322, Vitebsk region, g. Vitba

Alexander Vinyarsky is a minor resident of Brest. He was sentenced to 3 years in an educational colony in the case of "mass riots".
VK # 2, 213807, Bobruisk, General Batova, 4

Igor Prezhennikov is a 21-year-old political prisoner. He was sentenced to 1.5 years of imprisonment for sticking a sticker on a video camera in the central police station on Akrestsin Street.
IK No. 2, 213800, Bobruisk, Sikorsky, 1

Artem Tokarchuk is a 34-year-old architect from Minsk. Sentenced to 3.5 years in prison for resisting arrest at the March of Heroes.
IK No. 15, 213105, Mogilev, p / o Veino, Slavgorodskoe highway 183

Vladislav Koretsky is a volunteer at the headquarters of Viktor Babariko. Sentenced to 5 years in prison. Vlad worked for the film "Farsi Lessons" directed by Vadim Perelman.
SIZO-1, 220030, Minsk, Volodarskogo, 2

Sergey Volkov is an actor of the Polesie Drama Theater, a volunteer. He is raising a child with a disability; he was detained as part of the Pinsk case. Sentenced to 4 years in prison.
SIZO-6, 225413, Baranovichi, Brestskaya, 258 B

Olga Mayorova is a social activist, previously an active member of the United Civil Party. Detained in the “case of Mikalai Autukhovich”.
Prison No. 1, 230023, Grodno, Kirov, 1

Anastasia Yaroshevich is a 19-year-old resident of Lida. She was sentenced to 2 years in prison for preventing the arrest of a man on the street.
IK No. 4, 246035, Gomel, Antoshkina, 3

Sergey Krasovsky is an individual entrepreneur from Brest. Convicted for the "stuffed rail" case to 2 years in prison.
IK No. 2, 213800, Bobruisk, Sikorsky, 1

Evgeny Govar is an employee at the Belarusian Metallurgical Plant in Zhlobin. Sentenced to 2.5 years in prison.
IK No. 22, 225295, Brest region., Ivatsevichi, Domanovo, PO Box 20

Alexander Kordyukov is a resident of Brest, a friend of the deceased Gennady Shutov. He witnessed how his friend was killed. From a witness by a court decision, he turned into a criminal, sentenced to 10 years in prison.
IK No. 15, 213105, Mogilev, p / o Veino, Slavgorodskoe shosse 183

Andrey Korolenia is a graduate of the military department of BSUIR. He was engaged in information security systems. Sentenced to 2 years in prison.
IK No. 2, 213800, Bobruisk, Sikorsky, 1

Yuri Vlasov is the confidant of presidential candidate Svetlana Tikhanovskaya. Sentenced to 6.5 years in prison.
IK No. 1, 211440, Novopolotsk, Technical, 8 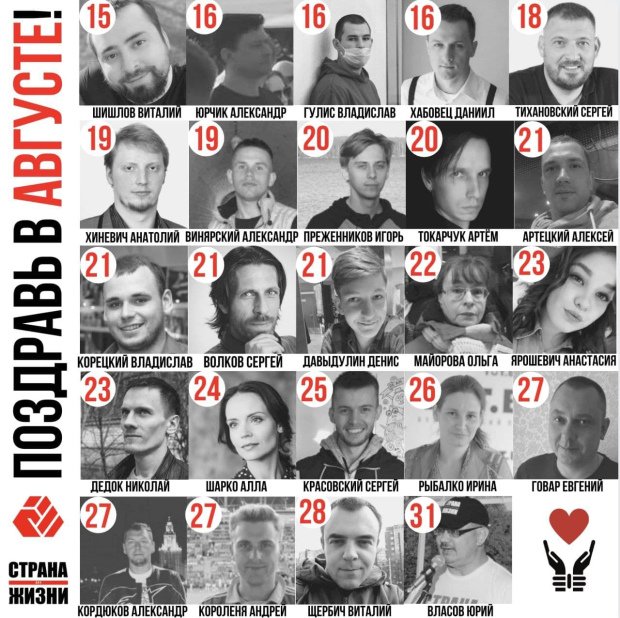