Political prisoners are celebrating their birthday this week.

Mikhail Beresnev is a resident of Minsk, sentenced to 2 years of restriction of freedom.

Evgeny Zelkovsky is a resident of Gomel, sentenced to three years and six months in prison.

Igor Ermolov is a volunteer at the headquarters of Viktor Babariko.

Andrei Koreshnikov is a resident of Minsk, sentenced to 2 years in prison.

Alexander Litvishchenko was sentenced to a year and six months in prison for allegedly insulting a police officer.

Yuri Nagorny was sentenced under Article 369 of the Criminal Code to two years of "chemistry" for commenting.

Valery Melnichuk, a resident of Brest, was sentenced to 4 years and 6 months in a maximum-security colony.

Vitaly Litvin is a defendant in the Brest "round dance case."

Sergei Shabunya is a resident of Molodechno, a defendant in the "rail" case.

Igor Bukas is a resident of Bobruisk and his son Oleg, accused and convicted of alleged violence against police officers.

Alexander Maryasov - detained on October 10 in the case of arson of the Tabakerka.

Alexey Semyonov was sentenced to 2.5 years of restriction of freedom for commenting.

Andrei Ostretsov is a resident of Lida, sentenced to 5 years in a maximum-security colony in a criminal case under four articles of the Criminal Code of the Republic of Belarus.

Maxim Pavlyushchik was arrested for drawing near Alexander Taraikovsky's memorial, who died during the protests, near the station. m. Pushkinskaya inscriptions, "We will not forget."

Friends, the history of each political prisoner, and the address for letters see the website of the HRC Viasna and dissidentby.com. Do not forget that letters from the outside are critical! In conclusion, Belarusians need your words of support.

You can collect a political prisoner for a stage by purchasing the most necessary items here.
SHARE: 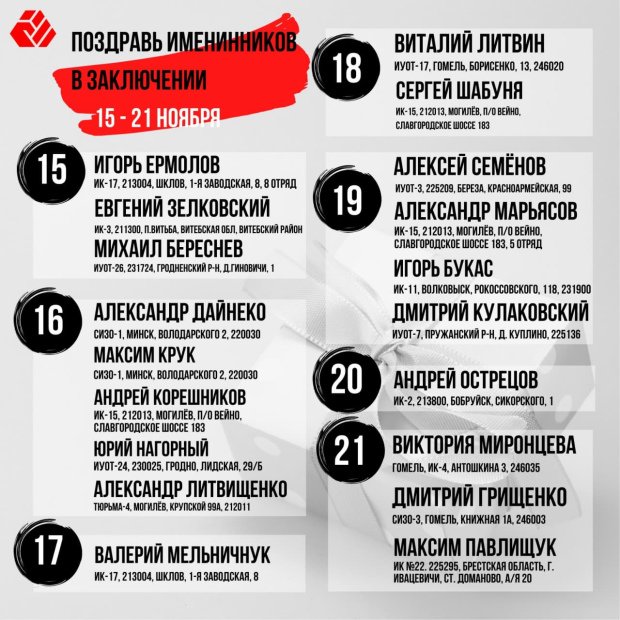