Congratulations to those who have a birthday on December 6-12

Political prisoners are celebrating their birthday in prisons this week.

Yuri Kostyuk. He walked with friends near the Molodezhnaya hotel and touched the "state" flag.

Vladimir Mikhalko a resident of Rechitsa, spoke unflatteringly about the "president."

Sergei Rozum is involved in the railway business. Placed a wire between the rails, creating a false signal.

Yegor Mikhailov is a Minsk resident sentenced to 10 years of high security in the case of setting fire to a T-72 tank in a military echelon at a railway station in Stepyanka by throwing a Molotov cocktail at him on the night of January 31.

Evgeny Kharyanov is a resident of Zhlobin. Convicted of blocking roads on August 9, 2020.

Ivan Kurylenko is a resident of the Kormyansky district. Convicted of reposting with personal data about employees of the Ministry of Internal Affairs.

Dmitry Fedosyuk and IT specialist Andrei Zeltser in the Minsk apartment.

Maxim Sarychev is a resident of Slonim. Convicted of insulting an employee of the Ministry of Internal Affairs.

Jozef Nemero is a pensioner, a resident of Grodno. Participated in a protest march in Grodno on September 6 and defended a woman from the brutal actions of riot police.

Friends, the history of each political prisoner, and the address for letters see the website of the HRC Viasna and dissidentby.com. Do not forget that letters from the outside are critical! In conclusion, Belarusians need your words of support.

You can collect a political prisoner for a stage by purchasing the most necessary items here.
SHARE: 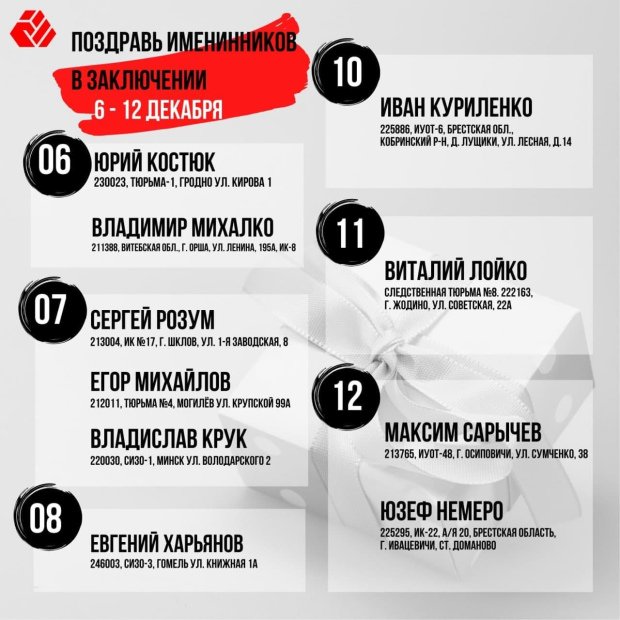