The environment of good deeds. Elena German – the widow of Alexander Taraikovsky

Law enforcement officers killed Aleksander Taraikovsky on the night of August 10-11 last year. Officials claimed that his explosive device blew up Taraikovsky, but video footage from the scene of the tragedy refuted this lie. However, the uniformed killer was not prosecuted. Today we are talking with Elena German - the widow of Alexander Taraikovsky.

If you want to help Elena German and her children, order the production of curtains for your car from her, or support with a kind word. Elena herself works alone. Therefore, in the case of many orders, she is afraid not to have time to do everything. But she promises to answer everyone.

- How has your life changed after August 10?

- Of course, it has changed a lot. I was left without a husband, with two children (Elena has a child from her first marriage and a child with Alexander Taraikovsky). We lived like a family - that is, I counted on my husband in everything and could rely on him. And now I need to make some plans anew and somehow live. This is a big challenge for me. We have always been together and worked together - and now we have to pull ourselves together and somehow think something further. And to earn money, and to raise children, and in general to live.

Another difficulty - I'm scared. I began to be afraid. I get tense when I see the security forces, the police. I think I see blood on their clubs. This is not normal. I cannot live in peace. There will no longer be the former quiet life when you feel at home in the city. Now I look at the city and people differently.

- Before the events of August, did you consider yourself an apolitical person? What was your attitude towards the authorities in Belarus?

- My husband and I were apolitical - we started to get interested when the election campaign began. We thought there was a chance that the situation in the country could change. We watched the news on "Belsat," went to the rally of Svetlana Tikhanovskaya in Bangalore, signed for the candidates.

I will not say that we were ardent oppositionists. But they did what they could. It seemed to us that we could change something if we do our bit. We have seen what is happening (in the country) - everyone probably has friends who work at state-owned enterprises, who are forced to put their signatures and are deprived of prizes. Everyone understood this.

- Why did you think that something could change in 2020?

- Because they saw adequate candidates for the role of the president: and not one, but several. Viktor Babariko and Valery Tsepkalo were sympathetic. Therefore, we decided that something could change now. And everyone was boiling - felt in the mood of the people. Everywhere this is discussed - both at work and in the sandbox among moms. It's in the air.

- What do you think now the people's dissatisfaction is gone or is it driven inside and waiting for a release?

- I communicate with people - no, nothing is forgotten. People are just afraid. Everyone sees the scale of the repression, and everyone has something to lose. The girls go out - they plan their walks so that no one is taken away - because look at how they are imprisoned, what terms are given. Of course, no one wants to go to jail. Probably just not enough for someone to organize, to be united.

- In February, the chairman of the IC, Ivan Noskevich, said that non-lethal weapons were used against your husband, and the person who did this acted reasonably. What did you think when you read about it?

- It was predictable that they would protect their own. It can be seen on the video that he (Alexander Taraikovsky) walked with his hands up, that he did not pose any threat or danger.

- Imagine a situation - the investigation into your husband's death has been resumed, the culprit has been found. What should be the punishment for him?

- ... I do not know how to say ... The man cannot be returned. And what is essential is not what the punishment will be, but that everything is according to the law. Let be such a punishment as provided for in this article.

I do not wish him bad because I know what it means to lose loved ones. Someone also loves him. He also has a mother. I want everything to be by the law so that he will bear this punishment.

- Who do you blame more for the murder of Alexander: the one who shot, or the commanders, or Lukashenko?

- It's hard to say. I think it all depends on the person. Why not shoot in the leg? It was a targeted shot to the heart. I don't know if there was an order or not. But the man went for it (shooting).

- When your husband was killed, the authorities said he was drunk. This story echoes the story of Roman Bondarenko. Why do you think Lukashenko, or someone from his entourage, justifies the murder of a person because he could be drunk?

- This is also incomprehensible to me. Do they think that if a person is drunk, you can shoot him? It just doesn't fit in my head. I do not understand.

- There was a memorial at the place of your husband's death, which was very harshly liquidated. Several people even received prison sentences for writing on the pavement. How do you rate this?

- It pains me very much to read such news, to find out such. This is just some kind of recklessness - how can you get a term for an inscription? You know, every day I drive to work and pass this place - and every day I see flowers there.

- How does your daughter now perceive the absence of her father, and what do you tell her?

- I did not immediately say where her dad is. I said that he is in the hospital. Then I talked to a psychologist. He advised me to tell the truth. Try to explain the situation as much as possible for her. So that she does not wait, so that she does not blame herself ...

She still cries. Every night she cries. Calls for dad. She seems to understand already that he will not come. But she asks me why he left home. Why he was killed. She says that "if I had wings, I would fly to my dad in the sky." The daughter will be four years old in May.


You can support Elena German and her children by ordering the production of curtains for your car or simply by supporting her with a kind word. Elena herself works alone. Therefore, in the case of many orders, she is afraid not to have time to do everything. But she promises to answer everyone. 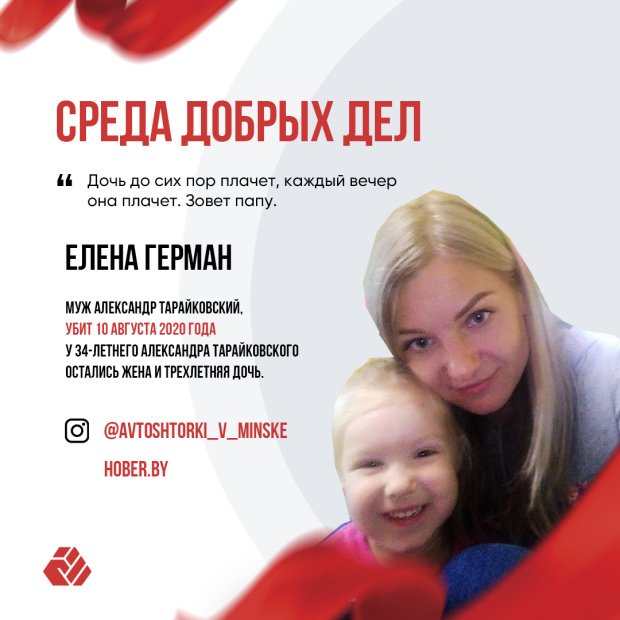