Nikolay Shemetov was detained on December 21 on the school's threshold, where he took his daughter. A search was carried out in his apartment, car, office where he worked. Investigators seized a laptop, phone, and work hard drive. At the same time, they refused to leave his wife a search warrant, an arrest warrant, and other copies of the search and seizure documents. On December 31, Nikolai Shemetov was charged under Part 1 of Art. 342 of the Criminal Code (Active participation in group actions that grossly violate public order). Now he is being held in remand prison № 1 in Minsk.

Nikolay Shemetov is a father of many children (the youngest son was born when he was already in jail). You can support Nikolay's family by buying flowers at his outlet in Minsk at 2 Matusevich Street - the "Biryuza" store building.

We have three common children (a daughter of eight, a son of six, and a two-month-old son born when Nikolay was already in prison). I also have an older daughter from my first marriage. Children experience the absence of a dad in different ways. The son simply draws pictures for him and waits to arrive with gifts (he will be back soon, and everything will be OK). But the son is more attached to me, like the eldest daughter.

The hardest thing for the middle daughter is Vasilisa. She and dad were one. My husband took her to school, took her out, put her to bed, read books, told fairy tales, did everything together... They even went to work, where Kolya taught her how they laughed, to become an "accountant." She sleeps poorly at night. I even took a small dog, which she very much asked to distract, but this does not help.

The husband asked not to tell the truth right away (why is he not at home). For a long time, they thought that he had gone to the North Pole ... But just recently, she told them the truth without her husband's permission. The children immediately wrote letters to dad. I think that he will cry there because of their creativity. They ask to take him to Volodarsky street and show them the place where dad is.

We have not felt the arrest until now ... In our country now, if you are arrested, then you are really a very wonderful person. And I am sure that this situation will be the maximum until the end of the year ... I am still an economist and a bit of a businessman. I see the problem around.

It is hard to understand that there are thousands of prisoners in prisons. Fear is from the lawlessness around. And in terms of life, it's not so hard already. I had to adapt. And when there are only like-minded people everywhere, everything seems easier.

The search was without children. The husband had just brought our daughter to school, he was detained, and they came with an investigation. It's hard for children without their laptops, which for some reason, the investigative committee really needed. There are only cartoons in the browser history, but they've been checking it for 3 months already...

Communication with my husband goes only through a lawyer. Yesterday I received a second letter from him. It was not even a letter, but a postcard. He does not seem to be discouraged and is doing well. Little is known about the terms. I hear that the camera is big, that he is the only political ...

At the beginning of spring, almost everyone in the cell was ill together. I handed him a box of lemons and garlic because my husband said they were more needed than cigarettes. There were situations when I delivered a transfer and in the evening a call from an unknown number. The girl sends greetings from Nickolay - she went on a date to her husband. He dictated my number and asked me that everything was fine with Shemetov, received the transfer, and loved and missed.

It is still unknown when the trial will take place. Very around the end of June.

Mother helps us; relatives help us, workers help us. Many people come to the store and convey warm wishes. It helps to keep afloat and see that we are really all together.

For this year, the consciousness of people is entirely different. I am 100% sure - everything will be fine! It simply cannot be otherwise!
​
You can support the family of Nikolay Shemetov by buying flowers in Minsk in a store at the address: st. Matusevich, 2 - the building of the "Biruza" store.
If you want us to tell your story, please write to us on social networks: 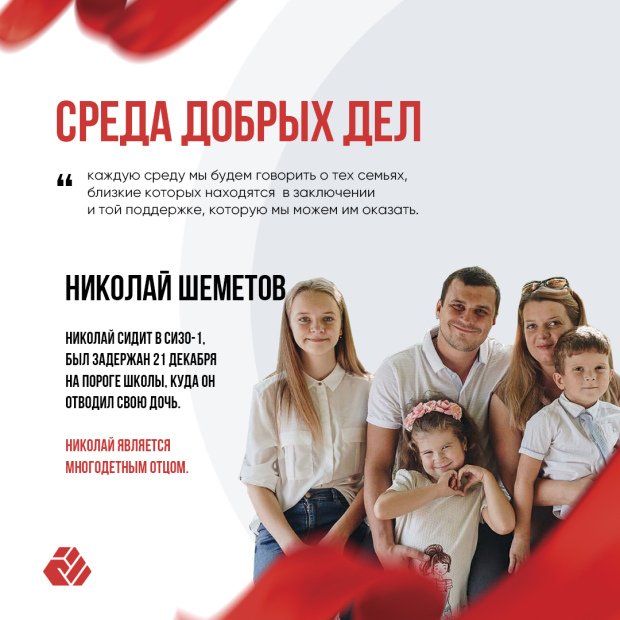