"A Country to Live in" Foundation was created in October 2020 at the initiative of Sergei Tikhanovsky to help activists and volunteers who follow the movement of Sergei and Svetlana Tikhanovsky. The idea was to support people who devoted all their time to the struggle for the freedom of Belarusians and continue to do this until now, without giving up, but at the same time lose their jobs, business, and even loved ones or their freedom.

During the year, 268 volunteers turned to the Fund for material support. A one-time aid amounted to 300 euros (in total, 80,400 euros were paid).

At the beginning of the Foundation's work, its employees were faced with the fact that many of Sergei Tikhanovsky's adherents, like their leader himself, were behind bars. Then it was decided to support the families of political prisoners. At the time of the opening of this program, there were 27 families in it. Now there are already 85 of them and almost each of them with children.

The monthly support amount is 300 euros for a family; 145,800 euros were paid in total for the year.

In addition, the Fund's team held several support actions for the families of political prisoners who are still in Belarus. These people are now having a tough time. Every day, in addition to the usual household chores, they are engaged in lawyers, transfers, and live according to the schedule of the pre-trial detention center and colonies. We handed them gifts for the New Year and Children's Day, helped get the children to school, congratulated women on March 8, gave flowers to mothers for Mother's Day on behalf of their children, political prisoners.

We did all these only thanks to you - caring people who donate their funds to support others.

We, the employees of the Foundation, are the same activists and volunteers who were forced to leave the country under pressure, the threat of criminal cases, and deprivation of children by the guardianship authorities. We continue to fight in exile. We are the same Belarusians. Only by coincidence did we not go to jail. And we, like political prisoners, have no other way. So we continue what we all started together in 2020 - to defend Belarus.

Unfortunately, it is becoming more and more challenging to assist every month because, during this time, our volunteers were detained, the Foundation's telegram channel was recognized as an extremist formation, our relatives are used to frequent visits by security officials and life under pressure.

In addition, financial support is falling because more and more people are in need, and donations come at the same or even less level. After all, material aid, also called humanitarian aid, is not supported by donors. It is formed only through voluntary contributions from individuals. Everything that happens can be understood and explained, but it is tough to accept. It's incredibly hard to say that there will be no support as before.

Based on this, we are forced to adjust the amount of monthly assistance and continue to support based on the current situation. Major changes:
All of these changes will take effect from November. For the time remaining until the end of October, we expect to contact everyone, delve into the existing problems and answer all the questions that have arisen. Friends, if something changes and means are found, we will revise the rules.

Please continue to support the families of political prisoners. You can do it here.
SHARE: 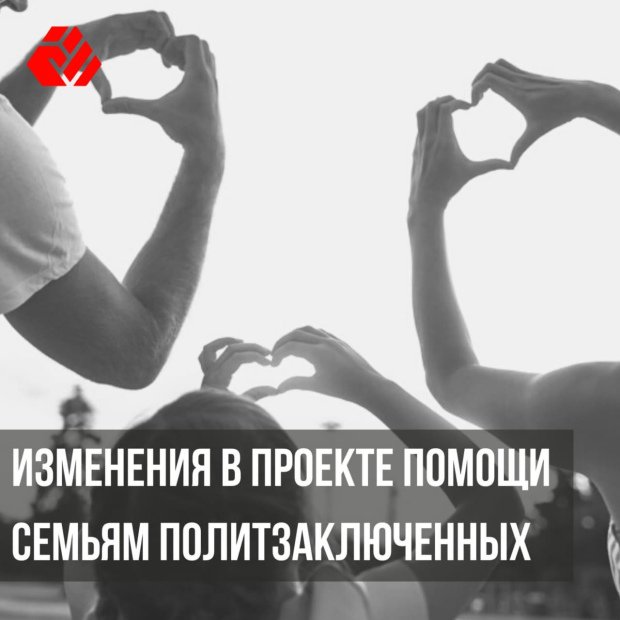