One of the important goals of "A Country to Live in" Foundation is to help create a civil society in Belarus. Only in solidarity and together can we build a country for life, a welfare society in which the interests of all citizens are taken into account, there is real democracy, there is no discrimination and violence.

One way to do this is to involve people as much as possible in the state's life at all levels, primarily local (courtyards, neighborhoods, villages). The more people demand authority, power, and responsibility, the better the state is organized, and the easier life is. This is getting rid of learned helplessness and infantilism.

Today we are starting to talk about the pain points of the Belarusian society and the state - the problems that do not allow us to move on. And most importantly, with the help of experts, we will present the ways out of the crisis created by the 26-year-old unlimited power of one person.

Evgeny Bury from NAU will tell why Belarus has such low salaries and how to fix it in the first episode.

- Why are salaries so low in Belarus?

- The level of salaries is a reflection of the efficiency of the economy. If the main task of the state. Since a business is maintaining employment rather than making a profit, it’s not surprising that instead of having 500 efficient workers and paying them $ 2,000, the business chooses to keep 2,000 workers and pay them $ 500. The level of salaries in the IT sector (the average salary is $ 1,876) demonstrates that there will be high salaries with high efficiency.

It is the state and budget sectors that negatively affect the average salary in the country. This is a consequence of the ineffective work of state-owned enterprises, the Soviet legacy in the form of a planned economy, the absurd fulfillment of planned targets for the sake of a beautiful picture in statistics, and the detriment of both direct enterprises and the economy as a whole. The budget deficit of Belarus has already reached a historical maximum of 5.6 billion rubles. With this level of deficit, the growth of wages among state employees. Enterprises and state employees are impossible, except for officials and security officials.

- For the last 10 years, the average salary in Belarus has revolved around the figure of $ 500. Is this the ceiling of Lukashenko's system? And will it be possible to move away from this figure in the future (in a big, understandably, direction)?

- Yes, we believe that $ 500 is the ceiling of Lukashenka's system. Moreover, even $ 500 is no longer in fact. According to the situation in February of this year, the average salary in the country was 1,277 rubles, which when translated into dollars at that time was $ 490. After withholding tax, that's only $ 426. If you take individual industries, you can see that even $ 500 a month is an unattainable figure. For example, in agriculture, forestry, and fisheries, the average salary in February this year was only 885 rubles, or $ 340, “on hand” it is $ 295.

- Why is Lukashenko's economic system ineffective?

- Because Lukashenko does not need an efficient economy. In fact, the economy of Belarus is held hostage by the political system created by the Lukashenka regime. In a country where there is no possibility of changing power through elections, the regime has no interest in ensuring a high standard of living for the population. Moreover, it is much easier to manage a population that is barely making ends meet, has no savings, is indebted, and is completely dependent on the state than those who are financially independent, travel to developed countries, and think about the future.

It would be appropriate here to compare Belarus with Poland. 30 years ago, these countries were approximately at the same level of development. In some ways, Belarus was even ahead of Poland. What do we have today? In Poland, the average salary is already almost $ 1,500 (and a low unemployment rate), while Belarus cannot reach $ 500 in any way.

- How can we change the existing situation with salaries?

- This is impossible without overthrowing the regime. Under the current illegitimate leadership of the country, the situation will only get worse. There are the following reasons: corruption, smuggling, and gray schemes, the withdrawal of assets from the country, the growing state. Debt, deliberate destruction of small and medium-sized businesses, complete loss of investor confidence, the rescue of unprofitable enterprises at the budget expense. All this will inevitably lead to economic collapse. We already see an increase in unemployment and poverty. And under this regime, the situation will rapidly deteriorate.

- Does Belarus need privatization, and if so, in what form?

- Yes, but only after the regime change. A detailed audit of all government agencies will be carried out—enterprises for their viability. Most businesses can be profitable by eliminating corruption schemes and attracting competent managers. Now the heads of state enterprises only 2 ways, and both of them lead to prison - if you are a good business manager, you will be removed. If you are a bad manager, you will be accused of “having a shitty cow” sooner or later.

- The most successful post-Soviet country, in your opinion? Suggest the 5 most important steps that will help us live like there.

- We would not limit ourselves to the post-Soviet bloc. In our opinion, Poland, the Czech Republic, and Estonia are good guidelines for Belarus at the first stage. Here are the 5 most important steps:
- Lukashenko openly says that many factories are ineffective and that excessive employment is especially supported there. What to do with such factories and people who work there?

- The number of employees in such factories should be optimized. For the downsized staff, it is necessary to organize retraining opportunities. With the development of the private sector, many new jobs will appear, which will solve employment.

On the other hand, in the lucrative state. Enterprises such as "Belaruskali," it is possible to increase the number of employees by increasing the added value created - instead of selling raw materials, you need to process them as much as possible and sell ready-made fertilizers, as well as turnkey services for farmers when sales representatives "Belaruskali" will sell not just fertilizers, but a whole service for fertilizing lands.

- What advice would you give to employees of such enterprises who are afraid of downsizing and closing these enterprises? Will there be any retraining programs in the new Belarus?

- Workers who are afraid of layoffs should understand that the current regime will not feed them in the long term, and layoffs are inevitable. They are already happening - look at the statistics of the last 10 years - at many state enterprises, the number of personnel decreased by 1.5-2 times. Retraining programs will be mandatory in the new Belarus.

We are already working on creating similar programs.

- Many Belarusians complain about working conditions: at an enterprise or in a village (frozen workshops or unsanitary conditions in the cowsheds). Why is this happening, and how can the situation be changed?

In conditions of healthy competition between private businesses, the owners of these businesses will be interested in creating comfortable working conditions for workers and developing infrastructure.

- In your opinion, can the state be an effective owner at all, or should it remain only in some spheres of the economy, and in most others, be a regulator?

The experience of the last 26 years in Belarus shows that the state cannot be an effective owner. The main tasks of the state in the economic sphere are to create conditions for the development of the economy and the growth of the well-being of citizens, as well as to regulate only certain sectors of the economy.

- Belarus needs reforms in the economic sphere. What is the best way to carry them out: quickly and painfully or gradually and not so painfully, or is there some third way? And whether Belarus alone can cope with such reforms, perhaps we need EU assistance, for example.

- We need to create favorable conditions for business development and economic recovery quickly. This includes protecting property rights (including intellectual property), tax changes, improving the investment climate, leveling the business environment for all forms of ownership, and a moratorium on inspections. The rest of the reforms will be more gradual - pension reform, education reform, healthcare, and other social spheres.

To avoid pain, we need financial and technological assistance from other countries, including the EU. Therefore, it is important now to negotiate with international partners to create a stabilization fund for Belarus.

- And how quickly, in an ideal case, Belarus will be able to reach the standard of living of at least the poorest EU countries (which right now is several times better than ours). Or is it impossible, and in this case, what should we consider a benchmark?

- Belarusians have everything to orient themselves towards the most successful countries in the world. We need to use the best world experience of developed countries when carrying out structural reforms in the economy and attract the best specialists in these areas. Then we will have the opportunity to jump over the intermediate stages of development faced by developing countries.

The new Belarus has a very serious potential for rapid economic growth, and we will make the most of it. One development theory says that very often, the development of something is a much more resource-intensive process than building the most effective and modern model at once. Therefore, we will try to use for the good even the fact of Belarus' backwardness in certain positions from developed countries.
SHARE: 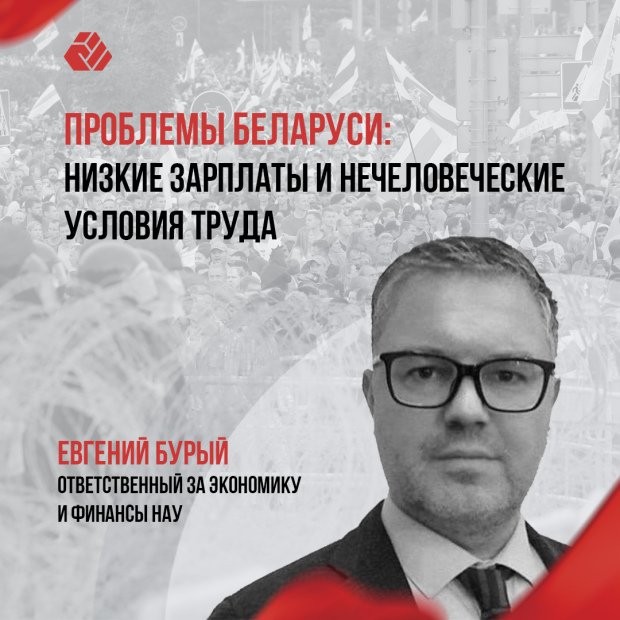