Pavel Seviarynets became one of the first political prisoners in 2020. A representative of the unregistered Belarusian Christian Democracy party was arrested on June 7. The time spent in custody was constantly being extended, and in August, after the election, a criminal case was opened against Pavel. Today we are talking to Olga Seviarynets, Pavel's wife, who is waiting for her husband and father at home with her son Francishak.

If you want to help Olga Seviarynets and her son, please visit the online store Kroplia.by and buy something there.

- Please tell us about your life now. What takes the most time? What do you worry about the most?

- Our life looks very different now, but it continues, though without Pavel, it seems to die down. Francishak and I are waiting for a husband and a dad. I deal with our online store, continue Pavel's business, deal with his books, try to do everything in my power. I also want this waiting time for Francishak not to be gloomy and sad. It is his childhood, his first years of life. I want him to be happy even in the middle of the horror that is happening.

I am most worried about Pavel. Now he was transferred from Valadarka to Mogilev prison, and if he was relatively close in Minsk, I could bring him a parcel, go to the walls to pray. Mogilev is 200 kilometers away. There is a new place, new people, new conditions and rules. I feel very sorry for my husband; I am afraid for his health. He spent almost all summer in solitary confinement. He had cold joints. He says he has a headache. To think how he is there and not know to help him, to be around, is the hardest thing that breaks the heart.

- Does Francishak remember his father, and what do you tell him about Pavel?

- He remembers, of course. Dad disappeared from his life physically, but spiritually we were together all the time. I tell Francishak a lot about dad. We pray for him together. We write letters to him together, we collect and send parcels, we talk a lot about how good it will be for us when dad comes back, what we will do together. I often tell my son that my dad loves him very much and misses him very much, that he is not to blame, that he cannot be with us now. Pasha also often sends letters to Francishak, draws pictures and coloring pages for him. It’s hard for me to watch my son grow up without a dad, but I believe this time, we will be able to catch up.

- Probably, Pavel is additionally worried because he doesn't see his son?

- Of course, it's harder for him now because he understands that we, his family, have been working with him for days and months, and this is our common sacrifice. He says he prays that this time of absence will not have a strong impact on Francishak. In fact, if you start focusing on how much Pavel hasn’t seen from Francishak’s life - his first words, his first reflections, missed his third birthday, it becomes very painful and difficult. But we try to focus on what we have, we have each other, and that’s a great joy.

- Pavel Seviarynets was one of the first to be arrested in June last year. Why did the Lukashenko regime consider him so dangerous?

- Lukashenko's regime considers every thinking person dangerous. Pavel is a brave and intelligent leader who influences society and is not afraid, to tell the truth. Of course, it was safer to detain him. Pavel was given another 15 days three times, as long as he did not go to the polls, but even after a day, he was not released, and a criminal case was hung.

- What exactly is Pavel accused of now? Is there information on when there will be a trial?

- Pavel is charged under Article 293, part 2 - participation in riots. An article entitled "Purpose - Square" was recently published in "Soviet Belarus," describing the case of the group consisting of Pavel. Moreover, the article came out before the case itself. There is no information about the trial yet, but according to the procedural procedures, it should start no later than the twentieth day of May.

- What is known about the conditions of detention? Is there a possibility of meetings, do letters reach Paul and from him? Have you seen Paul at all since last June?

- Pasha and I have not seen each other live since June 7. Only a couple of times last year, I saw him in court via Skype or heard his voice. As we are not scheduled to meet - we are in the eyes of the system enemies of the people. I know some other dates allow, but we don’t. Letters to Volodarka arrived. I received from Pavel all 90 that he wrote, except one. My letters also came from more. We don't know anything about the conditions in which Pavel is in his new place in Mogilev prison. He was transferred there a couple of days ago.

- Does Pavel share his thoughts on what is happening in the country, and if so, what is his opinion?

- Shares as much as possible in letters that are censored. Pasha hopes for the best but prepares for the worst. The past year of his "political career" was 25 years. He saw a lot. He went through a lot. Now he says that Belarus did not wake up to fall asleep again. It's just that we as a nation have not yet fully worked on ourselves. Now, there are deep processes that can not happen quickly - a return to our history, language, faith, understanding ourselves as a nation, understanding our path, understanding ourselves. This path is associated with pain and suffering, but it must be passed.

- What is his mood now, has he lost hope or believes in a better Belarus?

- My Pavel is so strong that it takes my breath away. I knew he was strong but didn’t know that much. Being almost a year behind bars, spending the summer in horrible conditions in solitary confinement, he encourages and inspires people at large. I am one hundred percent sure of him. He is the one who will never lose hope. He sincerely believes in a better Belarus. He started his journey for Belarus more than 26 years ago, and during this time, he did not despair, did not give up, did not become callous or indifferent. He really loves this country and lives as if a new Belarus has already come - he is not afraid and does what he can and should do.

- Due to the opposition of Lukashenko's regime, Pavel spent a significant part of his life in prison. Have you ever taken offense at your husband for this, perhaps wanting to live an ordinary life, just raising a child?

- No, I never took offense at him for that. I knew who I was marrying. Over time I understood and accepted the path that Pavel chose. I know he won’t leave it until he reaches the goal. The only thing I can do is support him and help him. And after he passed for the sake of Belarus and the Belarusian people, I will always appreciate his choice.

- What surprised you the most since Pavel's detention: the atrocities of the security forces, the heroism of the Belarusians, something else?

On the negative side, torture and lawlessness are most often committed by ordinary people, who torture people in detention centers and prisons month after month and find justification for their actions. And now what surprises me the most is that we can't do anything about it for almost a year.

- Why do you think Lukashenko was sent to Belarus? Maybe there are some versions from the bible?

- Our people gave birth to Lukashenko himself, allowed him to grow to the scale of the country. We did it by our silence when we had to shout, by our indifference, when we tortured and humiliated the first, by not understanding the mistakes of the communist past, our streets still bear the names of executioners, we forgot about Kurapaty and got Okrestsin. All this has led to the fact that we now have to fight the devilish system that has been built for years.

- When will Belarus be free?

When the Belarusian people realize themselves as a great unity, responsible for their land, start speaking Belarusian, repent of the past sins, and work on mistakes, most of them will believe in God. Then Belarus will be really free. And we are already on this path, it is difficult, but we have to go through it. And then such people will not be afraid of anything because we will be ready to protect ourselves and our values.

- What will you do first when your husband is released?

- I often imagine this moment - I want to hug him, look into his eyes to make sure everything is fine, I want to see how he hugs Francishak.

- How can people help you?

- You can help us with prayer, you can write a letter to Pavel, come to court, buy his books, you can visit our online store for gifts, we have been working for a long time, and we have a lot of beautiful, meaningful things. If you want us to tell your story, write to us on social media: 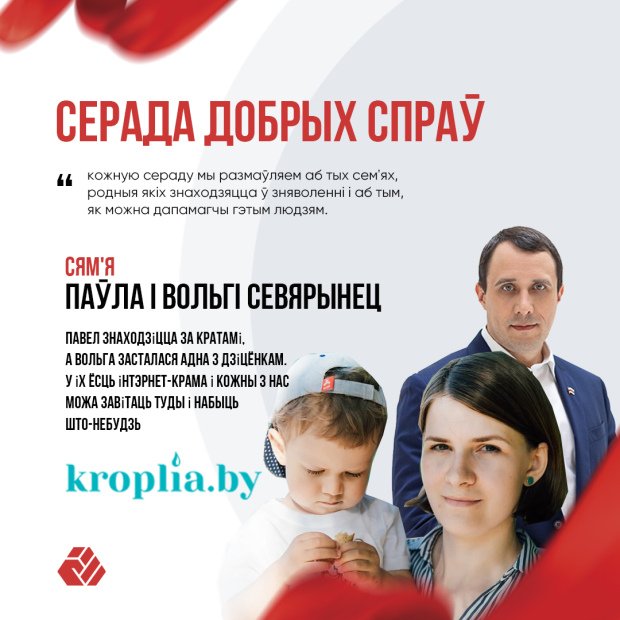