A hole in the budget, an increase in the number of unprofitable enterprises, a slowdown in business development in the regions - this is only a small part of what Lukashenko achieved in the first months of this year.

At a meeting with the state secretary of the union state, Lukashenko said: “Russia, just like us, everyone is trying to frighten with some sanctions. I am from the Soviet era. I know what the state plan is, as planned. I figured, my God, why we tremble and soar. We can calculate everything and fully provide ourselves."

Of these words, the only truth is that Lukashenko is really from the Soviet era and apparently remains there to this day. We have already talked about what the planned economy of state enterprises has led to. The only result of this is pointless warehouse work!

Apparently, it is also impossible to fully provide for ourselves - the state debt continues to grow rapidly. As of March 1, it amounts to 59,464.1 million rubles (slightly more than $ 22 billion). Since the beginning of the year, it has increased by 3.2%. Half of the state external debt is the Russian Federation's debt (about $ 9.1 billion). This is more than the gold and foreign exchange reserves of our country (as of March 1, 2021, they amounted to $ 7.1 billion).

The budget deficit in January-February alone amounted to more than 1.3 billion rubles. If growth continues at the same pace, then we will exceed the planned annual rate in May! At the same time, 3.1 billion rubles were allocated for national activities. Only 3.0 billion rubles were allocated for financing the social sphere (social policy, education, health care, physical culture, sports, culture, and the media). The salaries of law enforcement officers, judges, and officials are exactly included in the costs of this "nationwide activity."

All these statistics contradict Lukashenko's words about his planning skills and show the cowardice of officials. They cannot show people the truth that our country's economy can no longer sponsor the self-proclaimed one's rich life! 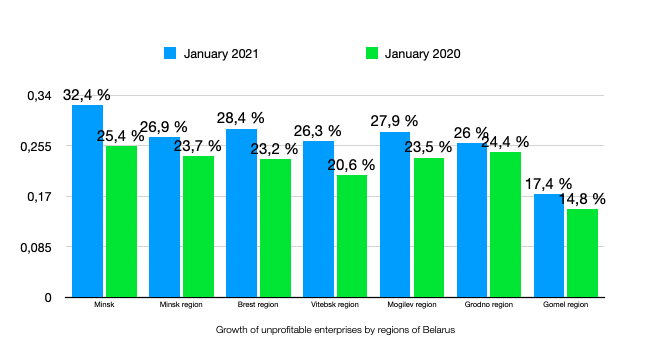 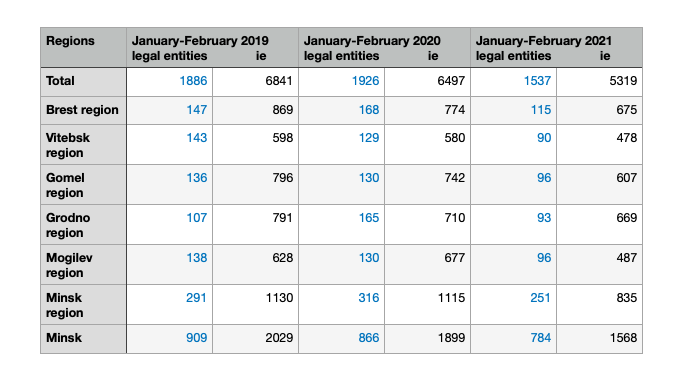 Vitebsk region is leading not only in terms of the growth of unprofitable enterprises. Over the past years, there has been a general decline in the level of development of entrepreneurship. In January-February 2021, 23% fewer individual entrepreneurs were registered and 38% fewer new legal entities than in the same period a year earlier.

Vitebsk region is not happy with its financial indicators. At the end of the first two months, it has losses of over 11 million rubles. It is not surprising because almost half of the region's districts declare losses instead of profits.

The profitability of enterprises in the Beshenkovichi region also has a negative value -11.8%, as in Shumilinsky - 8.5%, where almost 40% of enterprises are unprofitable. In the Dubrovno district, the profitability was 2.4%. According to the Inspectorate of the Ministry of Taxes and Tax Collection in the Vitebsk region for the period January-February 2021, budget revenues from small and medium-sized businesses amounted to 70 million rubles, while for the same period of 2020, the budget received 73.1 million rubles.

In terms of regions, the largest contribution to the revenues of the consolidated budget of the Vitebsk region in 2020 was made by Vitebsk (the volume of payments amounted to 697.7 million rubles) and Novopolotsk (631.4 million rubles), which account for 69.6% of all receipts. For many years, the largest taxpayers in the region have remained: RUE "Vitebskenergo," OJSC "Naftan," OJSC "Vitebsk distillery Pridvinye," UE "Vitebskoblgaz," JLLC "Belvest," and OJSC "Polotsk-Steklovolokno."

Earlier this month, the US government announced its intention to renew the sanctions imposed on large companies in Belarus in 2006 and 2010 but canceled in 2015. The list also includes large taxpayers of the Vitebsk region "Naftan" and "Polotsk-Steklovolokno." These enterprises' work has a significant impact on the economic development of the regions in which they are located, form a significant part of the regional budget.

The United States sanctions will introduce if Lukashenko continues his false rhetoric that there are no political prisoners in our country will increase these enterprises' costs. And in the absence of additional resources, enterprises will try to cut costs at the expense of workers (staff cuts and lower wages). This will cause irreparable damage to the regions' economies, which are already in a difficult condition.

The Vitebsk region's study clearly shows that the development of medium and small businesses in the regions remains relatively low. The regional budget is formed mainly by tax payments of large enterprises, which may soon be subject to sanctions.

On the other hand, Lukashenko continues to destroy the economy of our country, arrange genocide of the Belarusian nation, and spend money from the state budget for the sole purpose of keeping power in his blue fingers. 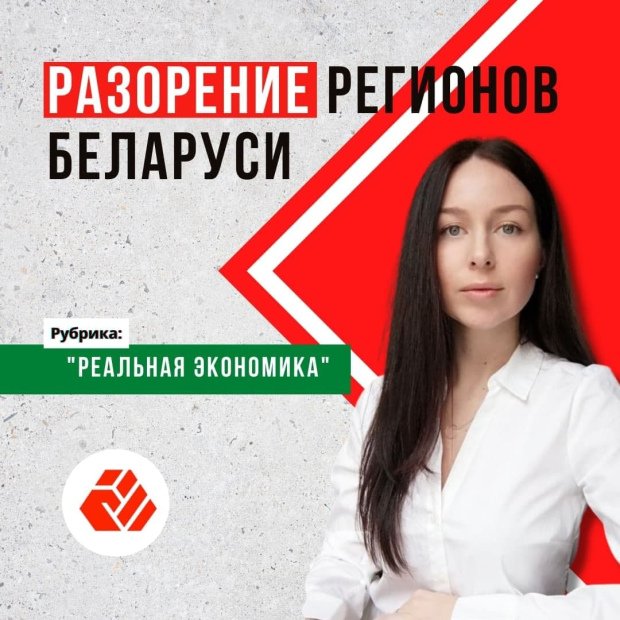