May 29, 2020, was the last day when Belarusians had the opportunity to freely approach Sergey and take a photo with a blogger who quickly gained popularity for his courage and desire for truth.

We are grateful for the questions you left to Sergey, and we hasten to share his answers from the conclusion.

Rewind time, would you go for it? Knowing that you will lose your family, children, freedom?

Of course, I would! Nobody knows how much time we have. Maybe tomorrow we can be bitten by a car. Therefore, we need to live in the present moment, and we need to live so that later, looking back to life, not be ashamed of the past. If you live with dignity, then you will never regret anything. Few remember, but before my detention in Grodno on May 29, I was free for only 8 days after leaving the prison cell. I lived these 8 days as like I had wings. Thousands of people took pictures with me and expressed their support. I saw how people believed in themselves. Not everyone can say that they lived at least one day like me. By compromising with their conscience, turning a blind eye to injustice and lawlessness, and keeping silent, many people think that this is how they will save their lives.

During the months you spent behind bars, have you become disappointed with Belarusians?

No, I haven’t. I received thousands of letters in jail, and I see people are fighting and doing everything possible. I am sure that the Belarusians will be able to unite around the leaders and win.

After release from prison, will you continue to work in "A Country to Live in" project or do something new?

If you became president in the new Belarus, what would you do first, or what decision would you make?

Those who are guilty of crimes against people must be punished and without any opportunity to hide anywhere.

What did you mean when you said, "it needs to be harder»?

I meant that Svetlana needs to express her opinion harder, to be harder when dealing with politicians.

Do you know what is being posted on the YouTube channel now? What do you think about it?

I know that real news is posted, besides some other stuff. News in a humorous way. That’s great! I didn’t watch it myself, but I read the scripts.

What does Sergey think about All-Belarusian National Assembly?

It is a circus.

Who Crimea belongs to?

The fact that Russian TV channels are broadcasted in Belarus is a great evil. Some time ago, for example, while watching “60 minutes”, I had doubts regarding the reliability of Ukraine's reflected events. Now, when I saw the way they are reflecting the events in Belarus, how they framed us all and supported the dictator, it is absolutely clear that they were lying about Ukraine as well. Of course, Crimea should be Ukrainian, not only de jure but also de facto.

Do you regret that you opened the eyes of the people at the cost of your own freedom?

I’ve never been interested in politics. There is no politics in Belarus. I liked communication with people. Even abroad. What is important for them, what is motivating them, what is the meaning of life for them? I am always thinking about making people's lives better, and I have lots of ideas about that.

How do you feel, and what do you think about Svetlana or rather about how much she did for Belarus?

There is a saying: the smallest part is done. It is necessary to concentrate on what else should be done for the victory. Certainly, Svetlana’s team did a lot, but it is not a time to relax until we in.

Could you imagine a year ago that Svetlana would represent Belarus in the international arena, meeting the EU leaders in person, representing our interest? How would you both react to a similar proposal a year ago?

Recalling the phrase of a rapper ST1M: “I didn’t choose Russian rap. Russian rap chose me!” I recall ST1M was performing at my birthday party, was rapping, and I was driving him around on my yellow Hummer H2. Neither Svetlana nor I was interested in politics at that time, but fate itself chose Svetlana and me. I could not act anyhow different. I believed that we would either win or lose. But I could not expect we would get stuck somewhere in the middle. Svetlana has to fight further. I could not expect that even back in May.

Sergey, will you stay in politics when justice prevails, and you are free?

I don’t know when I will be free. I always said that I would be in jail as long as Belarusian people will let me be in jail. I had lots of ideas I wanted to bring to life. But will I be healthy enough, will I have enough time – I don’t know that. At first, I was receiving a letter saying that we are almost there. Then, that it is about just a few months. Recently I’ve read that the regime will last another year. There are no other options: let’s wait until you realize that tying the ribbons and social networks threats is not helping. And after that, it is possible to think about politics. 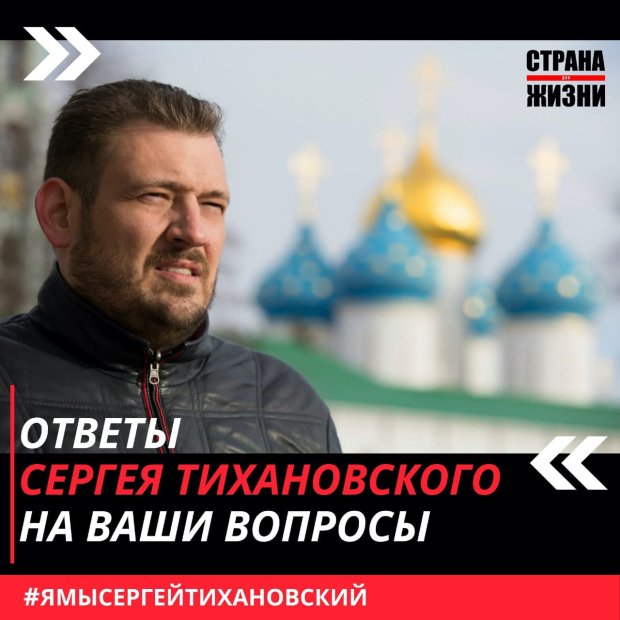