Wednesday 14 July has become a black day for the Belarusian human rights movement. The siloviki came to the offices of almost all national and regional organizations. 11 people were behind bars, the work of offices was paralyzed.

Also, as part of this operation, the chairman and founder of the human rights center "Viasna" Ales Bialiatski was detained. As a result, a criminal case has been opened against him (the article is still unknown).

Ales Bialiatski is an iconic figure in modern Belarusian history. A native of Karelia (his Belarusian parents met there) became one of those who started the revival of the national movement in the late 80s of the last century. Bialiatski was among the organizers of the rally in Kurapaty in 1988, participated in one of the first human rights organizations, “Martyrolog of Belarus,” was a member of the organizing committee of the public organization Belarusian Popular Front “Adradzhenne.”

But the main brainchild of Ales Bialiatski is the "Viasna" human rights center, which celebrated its 25th anniversary this year. This is one of the oldest operating organizations of this kind in Belarus. And most importantly - with an impeccable reputation. Since 2003, it has been operating without official registration but continues to provide qualified and free assistance to people who have come under the pressure of the state machine.

Throughout the last year, "Viasna" and its employees have been working practically at the expense of wear and tear. Bialiatsky himself compared the level of repression in our country with Stalin's times. Spring also came under attack. Even before the sad July 14, four of its employees were immediately sent to prisons. The rest could have left but stayed.

As well as Ales Bialiatski.

At the same time, he knew perfectly well what to expect. In 2011, Bialiatski was sentenced to 4.5 years in prison for tax evasion (the Belarusian court considered the money to "Viasna's" accounts in Lithuanian banks to be Ales Bialiatski's personal funds). He served almost three years in prison and was released early.

The conclusion did not break him. Ales Bialiatski continued to help people.

Olga (name has been changed)

"This man, despite his relatively soft and intelligent appearance, is like flint on the inside: he has already stood the terms for many years, and - watch his interview - he remained calm, prudent, and, most importantly, a spirit to fight. Even in the most hopeless circumstances, as we can see. These people do not leave. They stayed to save others."

Anastasia (name has been changed)

“Ales is a person with a capital letter and a big heart.

He always knew what to do and walked forward confidently, knowing that there could be problems, some hardships, deadlines. And Ales never left him in trouble. He never stood aside. He knew every story. He worries along with the person and really helps, and after a while, he will definitely write and ask how you are if you need help.

Ales stand up for his employees and his beliefs. In any situation, he remained a person: sincere, kind, caring. Ales talked a lot about the fact that he was very much supported by people when he was in prison, their letters. Then he understood that he was not alone and that it was not in vain. Therefore, I ask you very much - write a letter to Ales Bialiatski and support other political prisoners. "

Right now, HRC Viasna and political prisoners need help with what each of us can do.

Become an observer at trials. Suitable for those who have free time on weekdays.

Fill out the form.

Do you want to help but do something different?

Fill out the form.

Ales Bialiatski will definitely see the collapse of the criminal regime. I want to believe that HRC “Viasna” will have little work for the new Belarus, which we all will definitely build. And law and order will not be fiction, as it is today, but the norm of life.
SHARE: 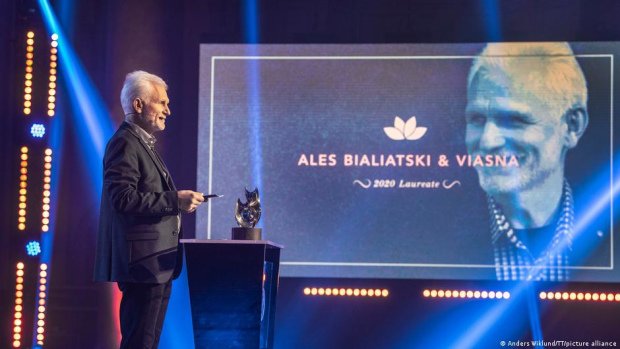