On March 23, another mass trial began. 14 residents of Pinsk (people of different professions, aged 19 to 44) are charged under Article 293 Part 2 of the Republic of Belarus's Criminal Code. According to the investigation, on August 9, 2020, they took part in the riots near the Pinsk City Executive Committee.

“After voting, Sergei and his friends went to the polling station to find out the results. From there, they were sent to the city executive committee and said that the results would be there. But riot police were already waiting for them. When they declared 80% for Lukashenka, people began to be rounded up, and the guys began to fight back, ”Olga Lezhenko, the wife of political prisoner Sergei Lezhenko, describes the events of that day.

Detentions in Pinsk took place not only in the evening after the elections but also over the next two days. According to local residents, everything that happened in the city resembled a sweep. People were taken on the streets and put in a temporary detention facility for three days.

“Our son Oleg Rubets was detained on the street in Pinsk on August 10. During the arrest, he was beaten. He was then placed in a temporary detention facility for 72 hours. After three days, he was charged under Article 293 Part 2, ”says Tatiana, the political prisoner's stepmother.

The detainees' relatives and friends did not see them for more than six months - visits are prohibited in the pre-trial detention center.

“We haven't seen our son since 10 August. Our requests for a meeting were refused during the investigation, so the court for us is the first meeting in seven and a half months. Tatiana shares her feelings.
The only contact with relatives for the detainees is correspondence. But correspondence does not always reach them.

- “My husband was detained on August 23, 2020. Since that time, I have not seen him again. They don't give us a date. They say it's not allowed. Correspondence is different. Sometimes you wait 2-3 weeks for a letter, ”says Olga, the wife of political prisoner Sergei Lezhenko.

In February, political prisoner Oleg Rubets went on a hunger strike to protest the SIZO leadership's actions. The young man was on a hunger strike for 5 days. As a punishment for this, Oleg was placed in a punishment cell for 6 days.
Initially, it was planned that the trials, in this case, would take place in Pinsk itself, and the lawyers of the detainees were even notified of this. But at the last moment, the meeting was transferred to the court of the Moskovsky district of the city of Brest.

“Neither the lawyers nor we know why the cases were transferred to Brest. We can only guess. Our town is small, the case is quite resonant, there are 14 people in the dock, and the victims are police officers, ”explains Tatiana, stepmother, the stepmother of political prisoner Oleg Rubets.

Another reason for the transfer of the case to the regional center may be the support of political prisoners by residents of Pinsk.

“During all these months, other families nor I have experienced any negativity towards them. The townspeople supported us, sympathized with us. I am very grateful to our Pingchans for such support. It was essential for us during this period. And the guys in prison felt support because letters were written to them all the time. The guys know that the city is for them, ”adds Tatiana.

Human rights activists recognized all 14 people detained in this case as political prisoners. According to Article 293 of the Criminal Code of the Republic of Belarus, a violation of which is imputed to men, punishment is provided in the form of imprisonment for a term of 3 to 8 years.

“This is pure farce. 3 to 8 years old. For what? For the fact that they expressed their civic position? Of course, all these tribunals do not give any hope. We are preparing for a deadline and a decent deadline. But we still hope for the best, ”Olga, the wife of political prisoner Sergei Lezhenko, comments on the situation.

Court sessions are held in Brest at Levanevskogo street, building № 1. Only relatives of the accused and representatives of the state press were allowed to attend. 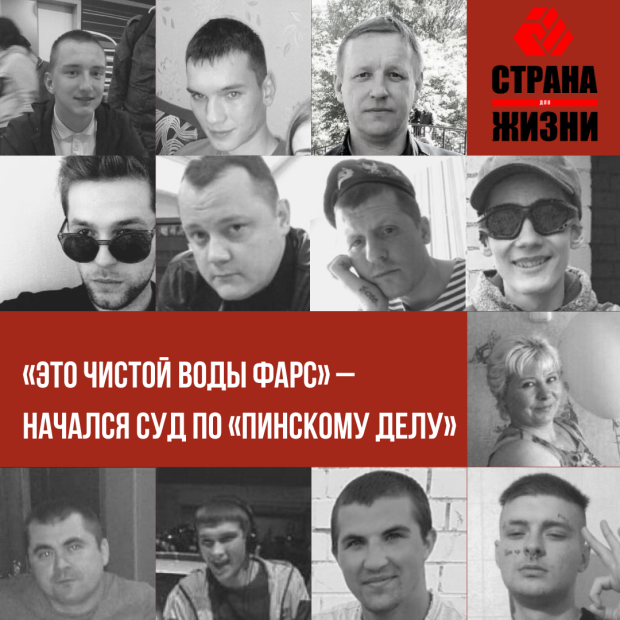