Today we are celebrating the 27th anniversary of the adoption of the Constitution of the Republic of Belarus. What is it, and why is it important? This is the answer given by the pravo.by.

One important feature - the Constitution can be as good as you like (for example, the so-called "Stalinist constitution" adopted in the USSR in 1936 was quite democratic for its time). But at the same time, people lived in a totalitarian state.

Paradox? Not at all.

The decisive factor is not how progressive norms are spelled out in the Constitution but how they are implemented.

In Western countries, the government branches - executive, legislative and judicial - monitor the Constitution's observance, restricting and controlling each other. It was the same in Belarus, but the 1996 crisis, when the Supreme Council and the Constitutional Court almost impeached Lukashenka, changed the situation. Then everything was resolved in favor of the first president, after which he crushed all branches of power under himself, becoming in Belarus, according to the apt expression of one official: - "Higher than God."

As a result, many provisions of the Constitution do not work, and Lukashenka's decrees have priority over them.

Here are just a few examples of how our country's fundamental rights are violated at President Lukashenko's suggestion and in his interests.

"The right to life" (the State does not protect a person's life, but on the contrary - in some cases, it takes this life itself).

Fundamental human rights both in the constitution of any country and in any of the religions. In practice, Belarus is the only country in Europe that uses the death penalty. This happens by a court verdict, but the president appoints judges in our country. They do not have sufficient independence, which creates the preconditions for abuse (as was the case with the Minsk metro explosion, when Dmitry Konovalov and Vladislav Kovalev were executed).

None of the shooters were punished for this.

In November last year, the death of Roman Bondarenko, to which Lukashenka's associates are most likely related, has not yet been investigated.

"Protection against torture and inhuman treatment" (not in Belarusian prisons and detention centers).

The events that followed August 2020 canceled the effect of this article on the territory of Belarus. Thousands of people have gone through torture and humiliation by "law enforcement" agencies. The worst thing is that people are pressured into prisons and isolation wards this day, creating unbearable conditions of stay and forcing them to take extreme measures - hunger strikes and suicide attempts. At the same time, the system massively denies people the right to justice. Not a single criminal case has been opened on the facts of torture and inhuman treatment of detainees since August last year.

"The right to vote and be elected" (in Belarus, it is valid only for one person).

Every presidential election since 1994 raises questions about its legitimacy. The reasons are a huge number of early voters and the impossibility of control over independent observers' counting of votes.

The 2020 elections have especially vividly highlighted the fundamental flaw in the Belarusian electoral system.

At the registration stage, the most popular (according to polls) candidates were refused: Viktor Babariko, Sergei Tikhanovsky, Valery Tsepkalo. Moreover, two of them ended up in prison. The people rallied around the protest candidate Svetlana Tikhanovskaya, judging by the CEC's official results, ended up not in the ballot box but an ordinary ballot box.

"All are equal before the law" (but some are more equal than others).

The equality of people before the law, regardless of their social status, is the basis of a just order in any society. Everyone has the right to legal assistance and equal protection of their rights. Simultaneously, in Belarus, lawyers may not be allowed to the incumbent president's opponents (as was the case, for example, with Viktor Babariko). Let us also remember how some ex-officials or business people are released from prison on bail. People who have committed less significant violations from the point of view of Belarusian justice remain in jail. Here we also include cases when for similar offenses (for example, a painted car), someone receives an administrative fine, and someone (an opponent of the current government) - an actual term.

"Freedom of opinion" (empty streets and happy life on TV).

It is ridiculous to talk about guarantees of freedom of opinion that the State should provide. This state does not issue accreditation for the media's work (for example, the Belsat TV channel). Many regional newspapers and the country's largest news portal TUT.BY are massively deprived of their media status.

Free access to information is one of the nails in the lid of the dictator's coffin. And Lukashenka understands this very well, and therefore diligently cleans up the information field.

The task is not to leave popular media in Belarus, whose view of the events taking place in the country is slightly different from the official one. Simultaneously, state television channels, newspapers, and news agencies, which have been waging a real information war against Belarus's people over the past year, receive massive subsidies from the budget.

And finally, "ensuring the rights and freedoms of citizens is the highest goal of the state."

Our country is a member of the UN, which means that Belarus's citizens are subject to the fundamental rights and freedoms of the International Covenant on Civil and Political Rights. Here are just a few of them:

The list is far from complete, and you can continue it yourself. The question is, is "ensuring the rights and freedoms of citizens is the highest goal of the state"? Maybe today's Belarusian State has a different goal?

The Constitution today has turned from a set of laws that are binding on Belarus into fiction. Both Lukashenka and his assistants are wiping their feet about the fundamental law. Now is the time to change that. 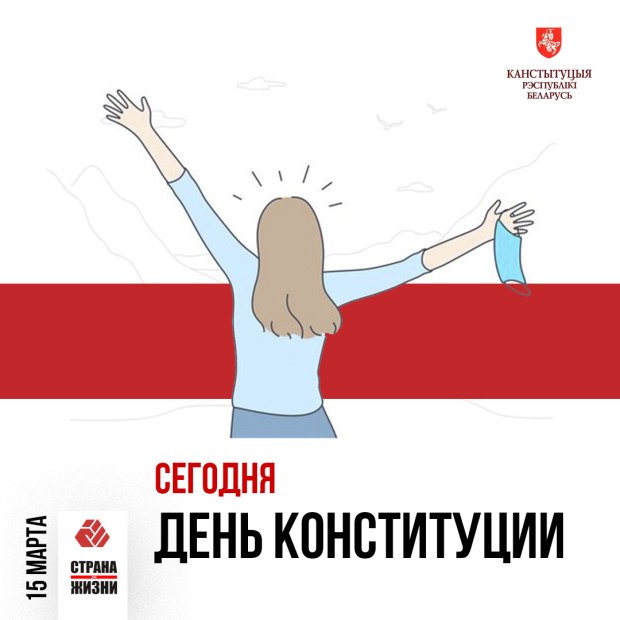