Today Belarusians celebrate Freedom Day. Employees of "A Country to Live in" foundation, located in Vilnius, took to the streets of the city with posters and the national shrine of Belarusians - a white-red-white flag.

With our action, we want to remind you that each year of Lukashenko’s rule is marked by widening repressions against society - the dictator has always seen a threat to his rule in the free and peaceful actions of the people.

Like a dragon lying on gold, he zealously watched any encroachments on power and "stability." The past year has shown this particularly clearly. People’s discontent with Lukashenko’s failed policy and electoral fraud has never been so widespread. Never before have so many Belarusians taken to our cities' streets to protest against the usurpation of power.

Courageous Belarusians in 2020 badly wounded the dragon, and now he is licking his wounds surrounded by jackals and hyenas. Huddled into a dark hole and wants to seem scary - hisses and spits smoke. But he's weak. His departure is a matter of time and the amount of pain that he still has time to inflict on us.

Like all Belarusians:
Belarusians became free. Together we will defeat the dragon.

Open the window, go outside. Look each other in the eye. 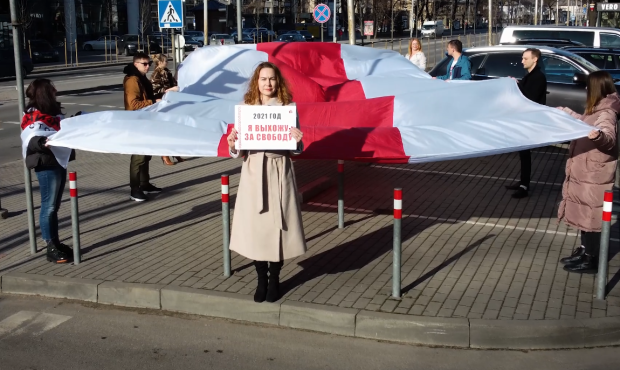