A year since the murder of Roman Bondarenko

A year has passed since the terrible events at the "Square of Changes" (the Minsk courtyard, which received this name due to the active civic position of residents). At nightfall on November 11, masked men and women arrived there and began to cut the white-red-white ribbons from the fence. Naturally, people were indignant at what was happening. One of those who addressed the claims to unknown persons was Roman Bondarenko.

He was beaten right in the yard, then thrown into a minibus, where the beating continued. Roman was taken to the ROVD, and at about midnight, he was taken to the hospital in critical condition. On the evening of November 12, Roman Bondarenko died.

The names of those who kidnapped and beat the man to death are de facto known. However, in September this year, the Prosecutor General's Office suspended the case on the fact of death due to "the impossibility of establishing the identity of the person involved in the crime."

We talked with Roman Bondarenko's cousin Olga Kucherenko about what kind of person Roman was and how their family's life has changed over the past year.

- Tell us what kind of son, brother, Roman was? What did you like to do as a child?

- Roma was a kind person, first of all. And even when he found himself in situations where it would be possible to show aggression, he tried not to sink to emotions but to resolve any issue amicably.

I knew that I could always ask him for help in his competence, and he never refused. As a son, he was attentive, and I saw how he cared about his mother, which is understandable because he is the only man in the house.

But for all its good qualities, I can also note that he has been somewhat lost in the last couple of years. If Roma was engaged in some business, then he approached everything very responsibly. However, because he had to work in a sphere not close to his soul for some reason, it seems to me that he felt dissatisfied with his life.

And he had many big plans that just had to start being realized after being fired from work. So it was on the day when he was attacked, he handed over all the cases at work and was going to start a new life.

It is hard for me, as a sister, to realize this because I saw how Roma wanted to start being involved in what he loved and how he burned with his plans. However, he was a strong-willed, intelligent and decent person.

- What were his favorite places in Minsk where he liked to walk, spend time?

- Roma loved Victory Park. It's next to his house. So I associate this place with him. There he ran and rode a bike.

But I would say that Roma is no longer about where, but with whom. Of course, he loved to spend time on the Square of Changes, but this is more likely thanks to the people there. Aunt Lena (Roman's mother) repeatedly told how he invited her there when she asked what he was doing there, talked about what great people were there - intelligent, funny, creative, and of all ages, that she would surely like it there.

- Please tell us how Roman's mother lives today? What are her thoughts on these November days?

- Right now, of course, she is busy with the issue of organizing a commemoration, meeting with relatives. And this, to some extent, distracts her from sad thoughts. And in general, Aunt Lena is an active person with many plans and ideas. So, therefore, she very courageously experiences everything that happens.

But, of course, from time to time, she is left alone with thoughts, and I know for sure that these are difficult moments. Although a year has already passed, she and I perceive this situation as if it happened recently. Because all year, every day, we think about it and try to achieve justice.

It is psychologically difficult to let go of this event when you meet refusals at every step as if some invisible force puts a spoke in your wheels. But, of course, this makes you want to fight and act even more. Accordingly, it becomes harder to accept that Roma is not there.

- Roman's mom previously talked about the feeling of being watched, wiretapped. Is there such a thing today?

- Today, I have such a feeling. Again I hear a long connection of a call, clicks, rustling. But this is not so many and not so persistent. But it is. Either on memorable dates about Roma, or now, closer to the anniversary. Moreover, we rarely communicate by phone, more often live or messengers. But if suddenly it is necessary, then extraneous sounds are heard.

But when you talk to strangers, this is not observed. From time to time, it seems to me that some suspicious car is following me. But in November 2020, I got used to it, so I take these thoughts with humor. They're going - let them go on, guard. Well, and the story that Aunt Lena saw a huge drone with a camera pointed at the window of her apartment, probably, you can no longer remember?

- Do you, or any of your relatives, have a feeling of fear for yourself, maybe for those close to you?

- Oh, sure. The permanent feeling of anxiety and uncertainty about what will happen tomorrow. We are considering everything that happened to our family in November last year after Roma's death: surveillance, pressure "from above," how law enforcement agencies and state television exposed Roma and us, our conversations. Law enforcement agencies also do not see much movement about the investigation, willy-nilly, which gives rise to some doubts. Perhaps I say this out of anger and resentment, like a sister. But, unfortunately, there is no escape from these emotions.

- Is any of your family members subject to any pressure (work, business)?

- You know, I was not subjected to direct pressure. But, when you are faced with some problems, then somehow the thoughts automatically pop up that this is no accident. But in November, immediately after Roma's death, when we were not given his body for burial for a long time, a man allegedly from the Health Committee came to my mother's work. He told her in plain text that the funeral should not take place on a day off (we all remember that marches were held regularly on weekends). That (a funeral on the weekend) is one story, but it is entirely different on a weekday. So I take it as pressure.

And in general, what does the Health Committee have to do with the funeral and the day they will take place!?

- In September, the prosecutor's office suspended the case on the death of Roman Bondarenko. When will you think this case will reopen, and will Roman's killers be brought to justice under lukashenka's rule?

- Complex issue! I admit anything. Already, in my opinion, it is obvious that this will not happen just like that. But I can acknowledge that the situation in the country will somehow change, something will happen, or someone will influence the change in their position. It will benefit the authorities if the case is somehow still investigated and gets off the ground. Then, perhaps, albeit not in full force, they will begin to prosecute the participants in the murder.

At the same time, I also admit opposite thoughts - that this will not happen. Let's say I try to be ready for anything psychologically. But I am an optimist in life. So, therefore, it is understandable, I believe that justice will prevail.

- We are now witnessing a period of a very severe reaction - dismissals, arrests, fear of people, lack of expressed protest. But, of course, it is very difficult for relatives of political prisoners and relatives of murdered people to forget what broke their lives and continues to break today. But that the rest of the Belarusians are not "yabatki," but those who went to protests last year, those who voted against lukashenka. Have they resigned themselves, "turned the page," what do you think?

- I am sure that they have not forgotten anything, have not resigned themselves. I communicate with a massive number of people every day. Everyone is talking about one thing; the soul is restless. Some are more involved, some less. But people keep it to themselves.

Of course, you need to have a lot of will and courage to do something active while in the country. But we see what is happening. Everyone, of course, has been severely intimidated. And by murder and by repression. But, after all, everything that happens is not somewhere there. These are our neighbors, relatives, friends, colleagues.

On the one hand, it is beneficial for the authorities because everyone was touched, and thus people stopped going out on marches. But at the same time, when you see how terrible everything is here, next to you, it upsets people even more, and the protest inside each person intensifies many times over. Of course, it is unknown what this will result in, but it will not just stay that way. When there is emotion, sooner or later, it takes on some actual, physical, or something form.

- How long will what is happening in the country today last?

- As long as the regime has the means to live, while they can "milk" the people with the help of changes in tax laws, fines, low wages, and pensions. And of course, as long as the state will be able to receive loans from outside.

- If you had the opportunity to address the people involved in the murder of Roman, what would you tell them?

- Let them not doubt that they will be punished. And their punishment began from the moment they did it. But the further it goes, the worse it gets.
SHARE: 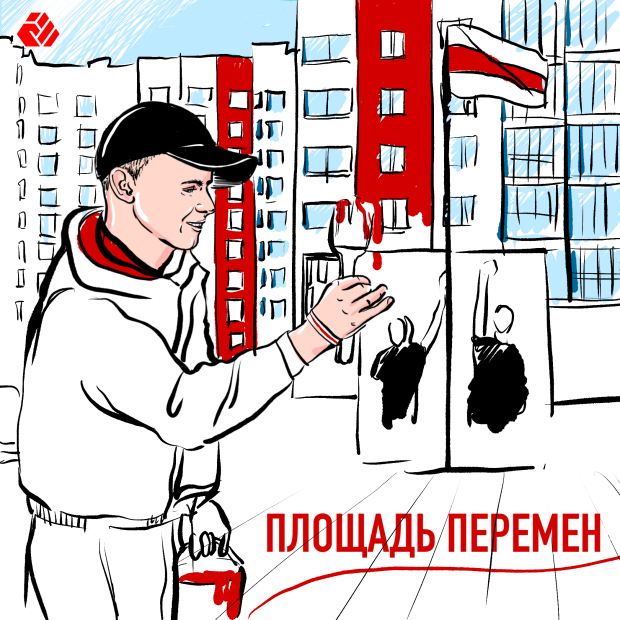