"Whom do you love? I love Belarus."

March 22 marks the 157th anniversary of the death of Kastus Kalinovsky. In modern Belarus, he has become a figure of silence even in comparison with Soviet times. For the Lukashenko regime, Kalinouski is too inconvenient - he fought against the Russian autocracy for the independence of his native land. Therefore, it is easier to declare him a Pole, as is actually happening in recent years (read the court historian, another graduate of the Mogilev Pedagogical Institute, Igor Marzalyuk).

Who was Kastus Kalinousky, and why is it essential for us now to remember his struggle and sacrifice?

Kastus Kalinousky was born in Mostovlyany of the Grodno district (now Poland's territory) in a landless nobleman's family. Historians argue about the origin of Kalinouski; Poles and Lithuanians also consider him their hero.

In the middle of the 19th century, our nation had not yet taken shape - this process ended 50 years later. Nevertheless, Kalinousky can be called a representative of the polished Belarusian gentry. The proof is his position during the uprising of 1861-1863. Unlike most of the rebels, he spoke directly to the peasants in Belarusian and urged them to join the struggle. Kalinousky belonged to the "red," radical wing of the rebels, who advocated the transfer of land to the peasants, a democratic republic, and the Polish–Lithuanian Commonwealth's self-determination.

In 1861, upon returning from St. Petersburg, where he studied, Kalinousky began agitation among the peasants. A year later, he publishes the first newspaper in the Belarusian language - "Muzhitskaya Prauda." In 1864, after the uprising's actual defeat, Yaska, the owner from the Vilnia (newspaper pseudonym), was seized by the authorities and put on trial.

On March 22, 1864, Kastus Kalinouski was hanged at Lukishki Square in Vilnius. Now there is a wooden cross at this place.

But his grave remained unknown for many years. In 2017, after several landslides on Mount Gediminas, where the tsarist army's barracks were once located, unidentified burials were opened. The remains were identified - one of the victims was Kalinovsky.

The funeral ceremony, which took place on November 22, 2019, vividly highlighted the fighter's attitude for freedom and independence in modern Belarus. The honorary military guard of our country did not take part in the ceremony. And the official delegation was represented only by the Deputy Prime Minister (there were presidents from Poland and Lithuania). Simultaneously, among ordinary people who came to the funeral, Belarusians and white-red-white flags prevailed.

Unfortunately, the issue of independence and freedom, like 160 years ago, is still acute for the Belarusian people. Moreover, freedom both external (economic dependence on a neighbor from the east) and internal (the dictator stole our rights and built a country for the life of a handful of security guards and officials, and not all people).

Once Kalinovsky gave answers to today's questions. He did not appeal to the elite of society - the gentry, but to ordinary Belarusians - peasants, who made up most of our country's population.

Then he was not heard. Maybe we will listen to him today.

"My brothers. From under the Moscow gallows, I have to write to you and, perhaps, for the last time. It is bitter about leaving my native land and you, my dear people ... But it's not a pity to die for your truth. Like day and night, they don't walk together. This does not happen together between truthful science and Moscow bondage. As long as we have it, we will have nothing, there will be no truth, wealth, and no science - only we, like beasts, will be turned not for the sake of good, but our destruction. "

Your servant
Yaska, the owner from the Vilnia.
SHARE: 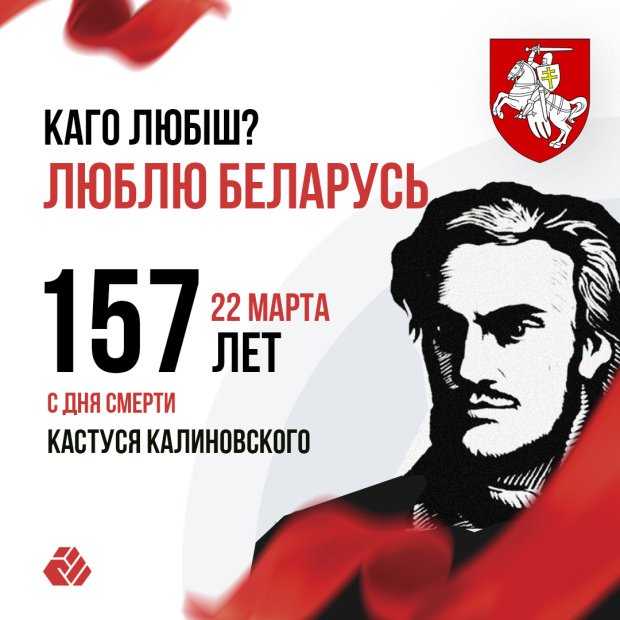