How many political prisoners are there in Belarus?

In October, representatives of civil society came up with an initiative to revise the official number of political prisoners in Belarus. In fact, there are more such people, just not all meet the formal criteria. Why this is important was discussed with Vyacheslav Kosinerov from dissidentby and Marina Adamovich, representing the "Liberation 2020" initiative.

Would you please tell us about the organization you represent?

V.K. The idea for our dissidentby initiative dates back to 2017. Then my friends from activist circles and I realized that the widely used repressive practices by the Lukashenka regime are a sophisticated tool for suppressing freedom of speech and independent opinion in the country. And most importantly, the facts of political persecution of activists, independent journalists, oppositionists, and everyone objectionable to the dictator do not cause a proper reaction from the existing human rights community and civil initiatives.

Several people who found themselves under the rink of the system, including in places of detention, were often left alone with the brutality of the security forces, dependent courts, and the administration of colonies and prisons. It was then that we began to actively participate in the process of direct assistance to such people, and first of all, to those whom, for one reason or another, the current human rights community did not want to recognize as political prisoners.

M.A. We are not an organization as such. I am one of the representatives of the civil initiative "Liberation 2020", which unites the holidays of political prisoners. It is easier to go through difficult times together, solve some issues, tasks and, of course, support each other.

Would you please comment on the statement you made in October? Why do you want to make a change in calculating the number of political prisoners, why is it important?

V.K. Our lists of political prisoners have always included more people than organizations that have worked in Belarus for a long time. First of all, this was and continues to be because they do not consider the context of the repressive system in Belarus, its genesis, and development.

The inadequacy of decisions on recognizing the situation in which Belarus found itself as a political prisoner was also very clearly manifested. Indeed, with the complete legal collapse in the country, the normative nature of torture, politically motivated killings, and openly sadistic practices of thousands of people, the system of work of the most famous human rights defenders has practically not changed. And now, not a few people, but hundreds, are left behind with the necessary information and material support.

M.A. Our participation in this statement, in this proposal, follows from the very essence of our initiative because we unite people regardless of whether the so-called official human rights organizations recognize them as political prisoners. We assume that each of the people affected by the protests has the right to support, protection by law, and a fair trial. There has never been such a division in our group. All these people have suffered because of their civil position. Or because of the exercise of their right to necessary protection or self-defense.

Tell us about your method of counting political prisoners and how it differs from human rights defenders?

V.K. The main stumbling block between the more famous human rights defenders and us is that even in such a situation, they deny any opportunity for people to use force to protect themselves or their loved ones, their health, or property (which is part of inalienable human rights), from cruel and often sadistic actions security officials who often (and this is documented) lead to murders.

This was the reason for creating a particular coalition of existing initiatives and organizations, foundations, human rights defenders, and independent activists to loudly declare that the existing approach to recognizing a person as a political prisoner is outdated and does not meet modern challenges in the context of Belarus.

M.A. If there has been an unprecedented situation in the country for a year and a half when we cannot hope for any case to be considered by a fair, independent court, we must proceed from the presumption of innocence. In addition, footage of brutal actions of people without identification marks, which were not presented in any way, flew around the world. When a person is attacked by such unidentified persons, his right to protect his life is unshakable.

The combination of these factors, first of all, requires that approaches to recognition as political prisoners be reconsidered. Of course, we understand that people imprisoned today may be people who have committed some violent acts. Still, the disproportion of punishment is evident for us, and they must be given the right to a fair trial.

How perfect are your calculations? Do they cover everyone affected by the regime's actions?

V.K. We do not appeal to certain speculations and our groundless vision, but we rely on the same criteria for recognizing a person as a political prisoner, adopted by PACE in 2012. The only thing we insist on is changing the interpretation of these criteria based on the situation of legal collapse in the country.

We are ready to say that our lists are the most complete and are constantly updated. In particular, this happens through cooperation with various related initiatives and organizations because we all share information and jointly organize a solidarity process. We also receive information about specific people in prison from journalists, to whom people often turn.

Our list includes people no one knows about, but by coincidence, they ended up in the same cell with those we already know. Such prisoners themselves try to convey to us the details of their persecution. We confirm such cases through a lawyer, who visits and finds out the facts of the criminal case after receiving the above information.

M.A. We try to consider it known to us (unfortunately, this is a significant caveat) because we realize that many more people may be behind bars. The latest figure announced by the investigative committee (in late July, it seems) is that the investigative committee opened 4,691 so-called protest cases related to the election and post-election events.

Of course, not all cases have defendants. Some people may be at large or abroad. But, realizing that the claim is brought against an indefinite circle of the person in several cases, we should understand that figure is much more prominent than that which we can operate. We consider all those who are behind bars to be "chemists" under house arrest.

We propose to introduce another criterion: persons affected by political persecution. These are the people who, for example, are on "home chemistry." We are also aware that some people who have served their sentences and been released are entitled to further full rehabilitation and reimbursement.

After your statement, did representatives of human rights organizations contact you, and how did they generally react to it?

V.K. We are trying to talk with human rights defenders who have been active in Belarus for a long time, already from 2017-18. We constantly invite for discussion all possible profiles and not only structures and organizations. Unfortunately, to our great regret, we often come across an attitude and rhetoric that is close to the fact that we are addressing a monopolist in any area. People do not want to discuss this issue and try to pretend that our approach does not exist or is irrelevant. While we, together with partner organizations, are at the forefront of helping victims of repression.

At the same time, there is no brutal confrontation between the supporters of the old approach and us. On the contrary, we cooperate on many issues, share information, and help each other. However, we insist on the legitimacy of our vision because the fate of many hundreds of people depends on it M.A.A..A. they did not contact me about it, I mean those organizations that sign applications for recognition as political prisoners. We invited representatives of these organizations to cooperate. But the process is still slow.

Was there any reaction to your statement about the Svetlana Tikhanovskaya Office or NAU? Do you expect this reaction from them?

V.K. Now we and our coalition need all possible support, and we would be delighted if Svetlana Tikhanovskaya joined our statement and voiced the actual number of political prisoners at the high-level meetings in which she takes part.

NAU, however, supported us, and now we are only waiting for the logo to place it on our list of organizations and initiatives that are in solidarity with our approach.

M.A. I am aware of NAU, which posted a statement supporting our approach. As for the statement of the Office of Svetlana Tsianovskaya, I do not know any reaction, especially since we have no ties with the Office. By the way, it surprises me.

How can Belarusians help your initiative?

V.K. The best help for us, and most importantly - for political prisoners, will be the use of a fuller number (of political prisoners), which we do our best to update every day. This will make it possible to make the affected people visible both for the Belarusian and international communities and also guarantee people informational, moral, and material support. And, of course, it will change the status of a person in places of detention, freeing him from several threats, pressure, and torture.

Dissemination of information about our approach and complete and up-to-date lists of political prisoners will allow people to understand this issue on their own and join the process of solidarity as they wish and can provide us or partner organizations with the necessary information about the repressedM.A.arusianM.A.

M.A. Belarusians are the primary addressee of our appeal. And these are the main actors who can help both political prisoners and their relatives. The primary purpose of our statement was to ensure that people who have suffered for expressing their political position because of the desire for democracy and change in the country have the full right to be known and receive support from society.

And of course, we all understand that if the expected changes come, the people we know of will be released immediately. At least, I hope so. And the more significant the circle of such people, the sooner we will move on to building a democratic society. Today, these people and their families need support. This is supported by correspondence and parcel remittances.

People need to understand that they are not left alone. It is essential for a prisoner to know that his family enjoys support and attention, that he is not seen as the family of a criminal.

How to add a person to your list of political prisoners?

M.A. It's very simple. In the case of detention related to the expression of their position, disagreement, or protest, you should inform the organizations listed in our statement.
SHARE: 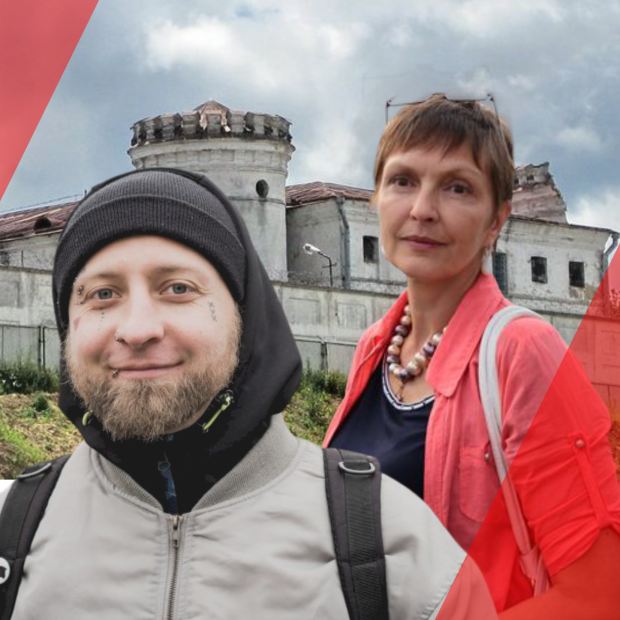