Ilya Makarov, Ambassador of "A Country to Live in" foundation: “I can't look at the lawlessness that the illegitimate president is doing!”

"A Country to Live in" foundation continues to look for Ambassadors - people who will represent the Fund in their country of residence. Several people have already responded to our call. Today we present one of them.

Tell us about yourself.

I am Ilya Makarov from the city of Izhevsk. Now I am a student in two specialties: a lawyer (in absentia at the RPA) and a teacher (full-time at the URSPK). An active political and public figure in his city. Member of the Navalny Headquarters in Izhevsk and a member of the Headquarters of Maxim Katz's Urban Projects.

Why did you decide to become the Foundation Ambassador?

I cannot look at the lawlessness that the illegitimate president of Belarus is doing. I want to do everything in my power to help the Belarusian people in their quest for freedom and democracy.

Do you follow the situation in Belarus, what do you think about this?

I have been actively following the situation in Belarus since May 2020, when independent and opposition candidates announced their nomination for the elections. Until August 9, I just watched the whole situation. I mentally supported the Belarusian people, but after large-scale election fraud and further usurpation of power by the illegitimate President Lukashenko, I began to do what was in my power to help and support the Belarusians: donated money, media covered events in the Republic of Belarus, participated in solidarity actions.

Are you a Belarusian, or do you have Belarusian roots?

If not, why are you interested in the situation in Belarus? No, I'm not Belarus, but our countries are very closely connected. We have a common history, a similar language, kindred peoples. And it is a great honor for me to be an accomplice of the peaceful revolution in Belarus.

Does the political system in Russia differ from the Belarusian one? Where is the situation worse / better /?

In our systems, of course, there are a lot of similarities, but there are also differences. The similarity lies in that we also have one person in power for a long time, who is already holding it by illegal methods. We also use violence against protesters. Opposition politicians are imprisoned both in Russia and in Belarus. The difference between our countries' systems is that in Russia, due to membership in the Council of Europe, human rights are more respected. I am not saying that the Russian Federation is a rule-of-law state. Still, we have more democratic standards in some issues: more political parties, independent opposition deputies, etc.

How exactly do you plan to participate in the work of the Foundation?

I plan to represent the Fund in the ranks of Russia's opposition to negotiate with Izhevsk and Udmurtia's local authorities. As Svetlana Tikhanovskaya said recently, to hold peace talks with Lukashenko, Russia needs to stop supporting and sponsoring his regime. I believe that in this situation, I can play an important mediating role.

What will you do first as an Ambassador?

First of all, I want to hold an act of solidarity with the Belarusians and support Belarus's spring protests in the media.

Do you know any of the Belarusian politicians?

You are a very young man. Where does your interest in politics come from?

I have been interested in politics since early childhood, and even then, I paid great attention to this. Now for me, this is a professional sphere. I am a candidate for municipal deputies, and recently I have been a member of Navalny's headquarters in Izhevsk. It seems to me that now a young age for a politician is a huge plus. The young politician is energetic, ambitious, full of strength and energy. He is also not fixated on any stereotypes that were brought up by the past generation. In most cases, young people live independently, learning from mistakes but go from the goal to the end.

If you want to become an Ambassador of the Foundation, fill out the form, and we will definitely contact you!
SHARE: 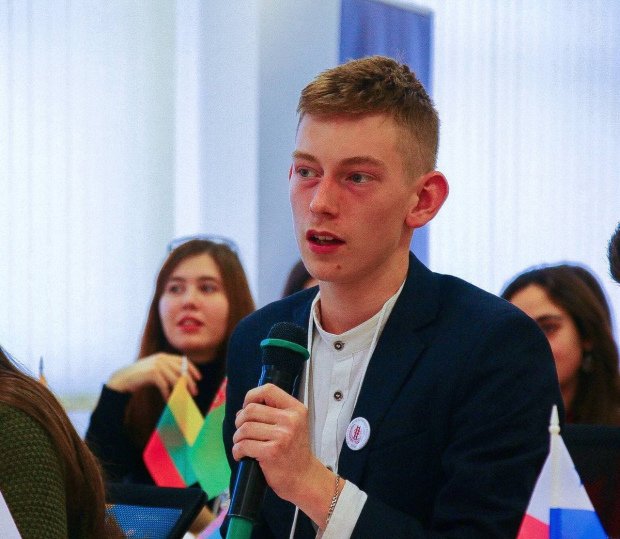