How to support political prisoners

There are hundreds of political prisoners in prisons right now (as of March 4 - 270 people). These people were not afraid to resist the criminal regime, and they tried to change the system of lies, one-person management, and lack of legality in the country. For this, the dictator and his clique threw them behind bars and subjected them to unjust trials. We, who remained at large and did not lay down our arms in the fight against lawlessness, must also help political prisoners.

Let's see how we can do this.

Send a letter or postcard

The simplest and at the same time important action for prisoners that each of us can do is write a letter. Letters in such situations are essential. In places of deprivation of liberty, as a rule, there is constant moral pressure on political prisoners that they were allegedly wrong, and everyone forgot about them in freedom. It can overwhelm people. Letters help a lot in such a situation. In fact, this is the only way to convey to them that we support them and believe in what they have done and are doing. But do not forget that the censor reads all letters and postcards.

The number of programs is not limited, and the weight is no more than 30 kilograms per month. This includes the weight of both food and items. Because the weight limit is set, human rights activists advise coordinating with relatives. For example, you can help loved ones collect clothes or food for detainees because families spend a lot of money on parcels.
There are nuances: anyone can bring a transfer to the pre-trial detention center on Volodarskogo Street or in Zhodino, but in the CIP on Akrestsin Street, for example, they only accept from relatives.
To transfer the parcel, you need to write a duplicate statement addressed to the pre-trial detention center's head. The application must list all products and things, as well as indicate their quantities. Here's an example:
Make money transfer

Also, the detainees in the pre-trial detention center can make a money transfer, and the amount is not limited. The money will be transferred to a special prisoner account, which can be replenished by postal order.

Useful magazines and newspapers can be subscribed

According to Article 34 of the Constitution of the Republic of Belarus, citizens have the right to receive, store and disseminate complete, reliable, and timely information about the activities of state bodies, public associations, about political, economic, cultural, and international life, and the state of the environment. Therefore, the least that each of us can do is to disseminate real information about those arrested for political reasons and the situation in which they find themselves.
The most important activity of the "Country for Life" foundation is helping people who find themselves in prison because of their civic position. We are in charge of 36 families of political prisoners, to whom we make monthly payments. The fund's volunteers weekly collect and deliver parcels to prisons and isolation wards for activists who are now behind bars.

Only together we can overcome the period of lawlessness and violence that has reigned in Belarus. And the fight against the criminal regime, which usurped power in the country, includes helping those Belarusians who have come under the harsh pressure of the brutal security apparatus and the unjust judicial system, who have been taken hostage and held in custody. 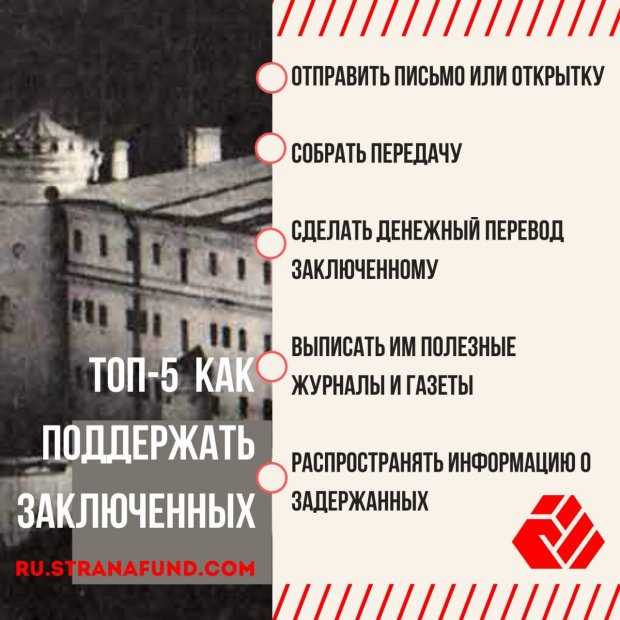