Thus, Lithuania launched a new stage in the delegitimization of Lukashenka's regime. This is the first EU country to take this step, and work is already underway to open a representation of Belarusian people in other countries.

I’m extremely grateful to Lithuanian authorities for their uncompromised position and huge support for all Belarusians.

We’ve felt Lithuania’s support neighboring shoulder for centuries. But in 2020, we realized its presence as never before because a friend in need is a friend indeed.

Thirty years ago, when Lithuanians were fighting for their independence, they were also not alone. They were supported by the whole democratic world. Even during Soviet occupation, Lithuania has had its legations in the USA, United Kingdom, and Holy See.

Yesterday, I came back from the official visit to Iceland. Icelanders that I met are very proud that they were the first country in the world to recognize Lithuania's independence from the Soviet Union. Lithuania was the first country to recognize me as the elected leader of Belarus back in September 2020. And today, I would like to thank President Nauseda, Prime-ministers Simonyte and Skvernelis, Ministers Landsbergis and Linkevicius, and the Lithuanian Parliament for their strong support. Since last summer, Belarusians have been grateful for the support they receive from Lithuanians who know the price of freedom.

Today’s presentation of diplomatic status to our office is an important step to delegitimize Lukashenka’s regime and reiterate the new Belarusian majority. This status means that the people of Belarus now have representation in the European Union country. Last but not least, it is another great example of Lithuania’s solidarity and fraternity.

And today, on behalf of all Belarusians, I would like to thank you for that. 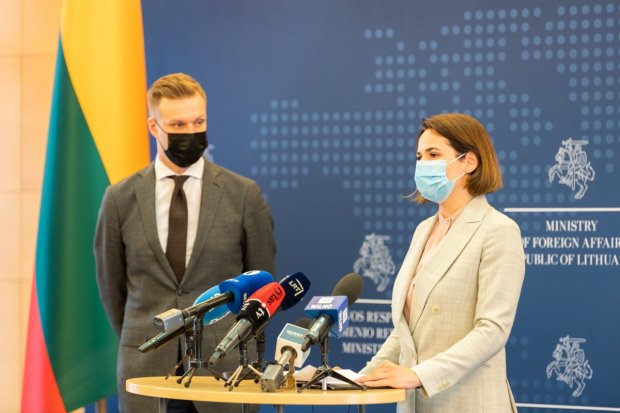