The work of the Office of Svetlana Tikhanovskaya for the week of April 12-18.

Svetlana Tikhanovskaya urged to join the "Rabochiy Ruh" launched by Belarusian workers through the stachka.org platform (the site opens with a VPN). The goal of the movement is to build up forces for the general strike and defend workers' rights in enterprises and companies.

Tikhanovskaya's advisor Franak Vyachorka answered the most frequent questions of Belarusians about the dialogue for a peaceful solution to the crisis in Belarus.

Svetlana Tikhanovskaya and Valery Kovalevsky held an online meeting of the Cabinet of Representatives. The Cabinet is developing a concept for a new Electoral Code, a program of economic reforms, an analysis of the Education Code, and a discussion on the draft Constitution.

Svetlana Tikhanovskaya chaired a meeting of the Main Composition of the Coordination Council, where they discussed a framework document for forming a negotiating group to resolve the crisis in Belarus. We also discussed a campaign to promote the concept of National Reconciliation.

Svetlana Tikhanovskaya made calls with doctors, workers, diasporas, and students.

Office volunteers launched the #мненужныпереговоры campaign. For the next 4 weeks, they will talk about how each of us can bring negotiations closer.

The Оffice held working consultations on preparations for the Parliamentary Assembly of the Council of Europe, which will consider two reports on Belarus: on elections and violation of human rights in Belarus.

US Ambassador Julia Fischer travels to Vilnius to visit Tihanovskaya's Office. Therefore, the team held preliminary consultations to agree on the agenda with the US Department of State and the National Security Council in the White House.

Read more about these and other results of the work of the Office of Svetlana Tikhanovskaya HERE.
SHARE: 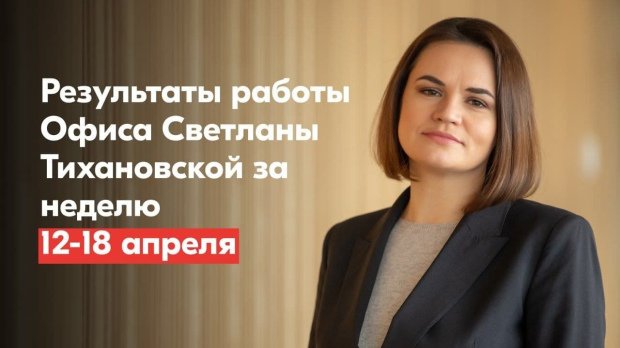